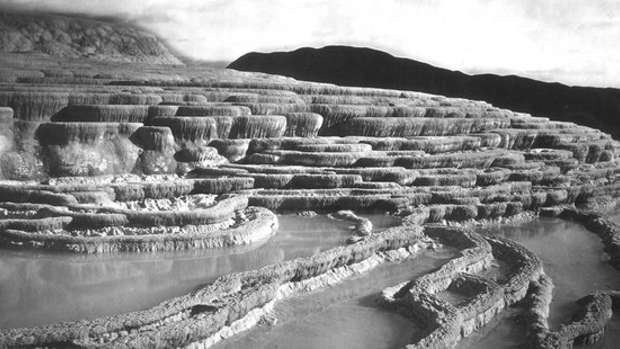 In 1886, the Pink and White terraces (one of New Zealand's natural wonders), were lost when volcano Mount Tarawera erupted.

Sometimes referred to as the "eighth wonder of the world", these large travertine terraces in pink and white colours were created by the deposition of minerals from hot water springs that flowed over them. Their magnificence made the country famous all around the world. Local Maori people called the place a "treasure" because they believed the waters had therapeutic properties.

But now, new insights just published in the Journal of Volcanology and Geothermal Research have given the clearest view yet into how the Mt Tarawera eruption in 1886 forever transformed the Rotorua lake and laid waste to the world-famous tourist attraction at its edge.

The research, led by GNS Science, was driven partly out of scientific curiosity and partly by the desire to clear up long-lasting uncertainties about the eruption and its impact on the lake and the terraces.

It involved collaboration with US researchers and pulled in some of the most sophisticated technology available - including side-scan sonar and seismic surveys - to probe the lake and reconstruct what happened during the eruption and following months.

Its highlight was the rediscovery of remnants of the terraces, which had long been thought destroyed.

"However, we found tantalising evidence from underwater photographs and side-scan sonar that remnants of both sites survived the eruption," said science leader Dr Cornel de Ronde of GNS Science.

Before the eruption, Lake Rotomahana was only about 20 percent of its present size.

As a result of the eruption the previous outflow of the lake became dammed, and over time it filled with water and formed the new Lake Rotomahana, much larger and deeper than the original.

One of the papers featured in the journal revealed what could be a sizeable magma body located under the southwestern end of the 17km-long explosion rift, near present-day Waimangu.

The interpretation comes from a geophysical technique called magnetotellurics that measures electrical resistivity of the Earth down to about 10km.

At its shallowest, the likely magma body was within about 2km of the Rotomahana lakefloor and its deepest extent is less clear, but it might extend down as far as 6km or 7km below the lake.

For Dr de Ronde, a magma body under the lake would account for the phenomenal amounts of heat and gas coming into the present-day lake.

It was unclear, however, if the magma body is related to the magma that rose up through the lakefloor in 1886 and mixed with water to produce the extremely violent eruption that blew the old Lake Rotomahana to bits.

Dr de Ronde said that, until now, no-one has seriously considered that a magma body under the lake might have played a role in the 1886 eruption.

"People have always thought the 1886 magma source was directly under Mount Tarawera," he said.

"My colleagues have shown there is another possibility."

The eruption - the most destructive in New Zealand for at least 200 years - saw half a cubic kilometre of lakefloor material ejected from the lake and splattered on the surrounding landscape.

The destruction of the majority of the terraces was perhaps not surprising, given that the eruption was so violent it was heard in Auckland and in the South Island.

Dr de Ronde said it was also the first time anywhere in the world where an on-land hydrothermal system had survived a volcanic eruption and being "drowned", and has still remained active.

"This project has been a unique opportunity to apply a lot of investigative technology in the study of a drowned geothermal system," he said.

"It was truly a pleasure to do this work and we hope we have left a legacy contributing to the history of this famous landmark."