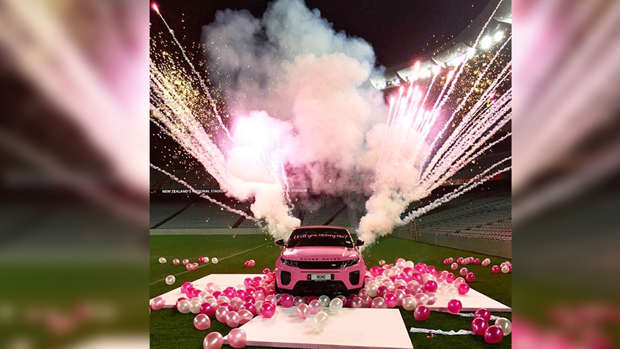 A Kiwi man has dropped to one knee in what could be the most elaborate marriage proposal New Zealand has ever seen.

Rakich boasts more than 740,000 Instagram followers and made his fortune in the online fitness arena. In 2014, after being discharged without conviction over the sale of class-C pills, the Auckland High Court heard his company, Josef Rakich Fitness, made over $800,000 in sales that year.

And it appears his financial success has continued. An Eden Park spokesperson confirmed to the Herald that on Sunday Rakich and his girlfriend Maryam Matti landed a helicopter on the sports ground where he had an elaborate surprise waiting.

I said YES to the man of my dreams. I love you so much Josef ♥️💍 An unforgettable proposal of all time. - Landed in Eden Park blind folded in a Helicopter and then walked over to a huge pink box. - Thank you for everything you do for me. You are my King 👑 Here’s to the future! 🙏🏼 @josefrakich I LOVE YOU!!! - Thank you to everyone who got involved and kept the secret for so long! I had absolutely no idea. Thank you to the camera crew, Woman’s Day and The Project NZ for being a part of our special day 💋

Captured by a film crew and live-streamed on Snapchat, Rakich is seen lifting his lady out of the chopper and walking her blindfolded towards a giant pink box in the middle of the field.

Together the pair tug on a white ribbon to open the gargantuan gift. As the sides fall away and balloons bubble out, Matti appears thrilled to find a custom pink Range Rover inside.

But that's not all: "Will you marry me?" is stamped across the pricey car's windshield and footage shows Matti turning back to her partner, who has swiftly gone down on one knee to present her with a ring.

Quickly saying yes to her buff bae, the couple are filmed sharing their excitement with surrounding friends as fireworks explode in the background.