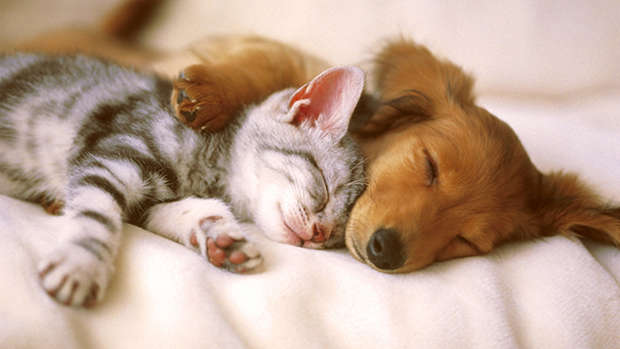 If you are a dog owner, you will be familiar with the sight of your pet scrunching up its nose, moving its legs or even barking in its sleep.

At the end of a long day running around fields or sniffing your neighbour's gardens, it is tempting to wonder what your dog is dreaming about.

But your four-legged friend is most likely to be dreaming about you, according to an expert.

Dr Deirdre Barrett, a clinical and evolutionary psychologist at Harvard Medical School, told People that dogs are likely to dream about what happened to them during the day - much like humans.

"Since dogs are generally extremely attached to their human owners, it's likely your dog is dreaming of your face, your smell and of pleasing or annoying you," she said.

The "basic maker that indicates dreaming" in humans is the motion of rapid eye movement (REM), which is when an individual's eyes begin moving around inside their closed eye lids.

"Cats lay quietly through the other stages of sleep, and when REM began, they leapt up, stalked, pounced, arched their backs and hissed," she said.

"They looked like they were hunting mice in their dreams."

When a dog moves its legs it is likely to be running in its dreams - chasing a ball, running towards a rabbit or fetching a stick.

In human brains, there is a mechanism that keeps our muscles from moving while we sleep.

However, when the switch is weak REM sleep behaviour disorder can develop and individuals will act out their dreams while they are still asleep.

The same thing goes for dogs, if their switch doesn't work that well the dog will look like it is running or snapping at something.

If dogs have bad dreams, they could be unhappy about something, Dr Barrett said.

"The best way to give ourselves or our children better dreams is to have happy daytime experiences and to get plenty of sleep in a safe and comfortable environment," she said.

"It's a good bet this is also best for pets' dreams."

Studies have shown how much and how long a dog dreams depends on its size.

For a typical medium-sized dog, their breathing is fairly regular and somewhere around 20 minutes into the sleep cycle, you can see the eyes moving around the closed lids and their breathing will become irregular.

Puppies spend a much greater proportion of their sleep time than adult dogs in REM sleep.

Adult dogs spend about 10-12 per cent of their sleeping time in REM sleep.

The average human sleeps about seven to eight hours per day, but an adult dog sleeps anywhere from 12 to 14 hours per day - about 50 per cent of a dog's day is sleep.