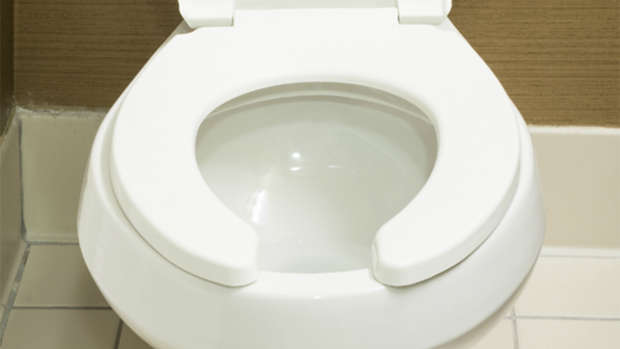 We've found out that the open-front seat is required by plumbing codes in the U.S.; “all water closet seats, except those within dwelling units, shall be either of the open front type or have an automatic seat cover dispenser.” The requirement was first included in the American Standard National Plumbing Code in 1955, and in the Uniform Plumbing Code in 1973.

The main reason for this is hygiene. The u-shape seat gives you breathing room to avoid touching the seat with your genitals, and provides one less place for urine to splash.

Open-front toilet seats are also largely designed to make it easier for women to wipe, according to Lynne Simnick, the senior vice president of code development at the IAPMO.

U-shaped seats are also cheaper, since they use less material.

And they’re less likely to be stolen, according to Roger Barry, the managing director of Healthmatic, a UK-based company that designs and manages public restrooms. Though we have no idea why anyone would want to steal a public toilet seat, he says that theft is a major problem.