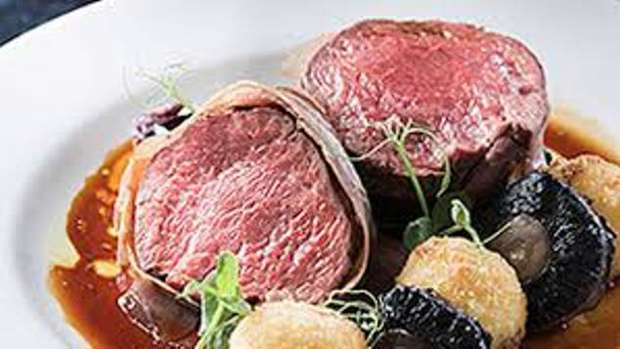 Congratulations to Scott Corbett, owner and head chef of Whitianga's No8 Restaurant & Bar, winner of the 2014 Silver Fern Farms Premier Selection Awards with this delicious dish that the judges called "faultless" - having sampled it, I have to agree!

1. Line ice cube dish with cling film and press blue cheese into four moulds until they are each one third full. Heat a portion of pinot noir until boiling and whisk in two teaspoons of gelatine until dissolved. Top the blue cheese with one third red onion jam then pour the wine mixture over cubes and leave to set in the refrigerator.

2. Place mushrooms on a baking tray, season well with salt and pepper, splash generously with olive oil and roast in oven for approximately eight minutes until three quarters cooked. While hot, take small cutting tool and cut as many rounds as possible from mushrooms and place in container. Squeeze excess juice from the off-cuts (this must be done while hot) and combine with truffle oil. Drizzle over rounds to marinate.

4. Cook steak to your liking then while resting the steak, thoroughly wash and drain the spinach.

5. Reduce your beef stock with a little pinot noir until it is of coating consistency.

7. Shallow fry potato balls till golden, warm through mushrooms. Wrap steak in Parma ham and allow to rest for a further three to four minutes.

8. On a warm plate place three potato pom poms, two mushrooms and spinach. Carve meat in half and place on spinach. Add one jelly cube per plate, drizzle with the beef stock/pinot noir jus and drizzle with truffle oil. Enjoy!