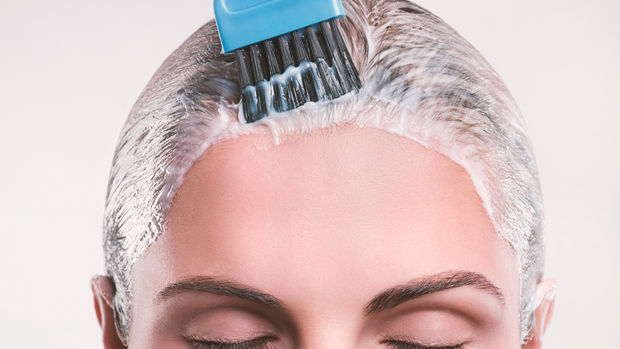 Women should dye their hair no more than six times a year and use natural ingredients to reduce the risk of cancer, a breast surgeon has claimed.

Professor Kefah Mokbel, of the Princess Grace Hospital in central London, found that women who colour their hair are 14 percent more likely to suffer breast cancer.

He said women should 'reduce exposure' to synthetic dyes by using ingredients such as henna, rose hip, and beetroot instead.

Professor Mokbel's study concluded: 'Although further work is required to confirm our results, our findings suggest that exposure to hair dyes may contribute to breast cancer risk.'

He wrote on Twitter: 'Women are advised to reduce exposure to synthetic hair dyes to two to six times per year and undergo regular breast screening from the age of 40.

'It would be preferable to choose hair dyes that contain the minimum concentration of aromatic amines such as PPD (less than two percent).

'Further research is required to clarify the relationship between hair dies and breast cancer risk in order to better inform women.

'It is reasonable to assume that hair dyes that consist of natural herbal ingredients such as rose hip, rhubarb etc are safe.'

He added: 'There is no evidence that hair relaxers increase breast cancer risk.'

Sanna Heikkinen, from the Finnish Cancer Registry, said: 'We did observe a statistical association between hair dye use and risk of breast cancer in our study.

'However, it is not possible to confirm a true causal connection. It might be, for example, that women who use hair dyes also use other cosmetics more than women who reported never using hair dyes.'