A man who was abducted as a toddler 32 years ago has been reunited with his biological family, thanks to the help of facial recognition.

Chinese man Mao Yin was stolen from his parents in 1988 when he was 2.

He was snatched outside a hotel in the city of Xi'a before being sold to a childless couple in a neighbouring province, according to state-broadcaster CCTV.

Mao was then raised by his adoptive parents as Gu Ningning.

But in late April, police in Xi'an received a tip-off that a man in Sichuan province had bought a child in the late 1980s.

Police then used facial recognition technology to analyse an old photo of Mao and simulated an image of him as an adult.

After extensive investigations and comparisons, police were led to a man in the city of Mianyang who resembled the image of Mao.

After undergoing a DNA test, it was confirmed the man was the missing son.

On Monday, 34-year-old Mao was reunited with his birth parents at a news conference held by the Xi'an police.

Emerging from a side door of the conference hall, Mao called out to his mother and ran toward her. The family of three broke down in tears in a long embrace, the livestream of the news conference broadcast live by CCTV showed.

The couple had last seen their son when the toddler asked for water, and they stopped at the entrance of a hotel to get some.

"I would like to thank the tens of thousands of people who helped us," Li told Xinhua news agency. "I can't believe that after helping 29 missing children find their families, I am able to find my own son."

Mao plans to move city and live with his biological parents. 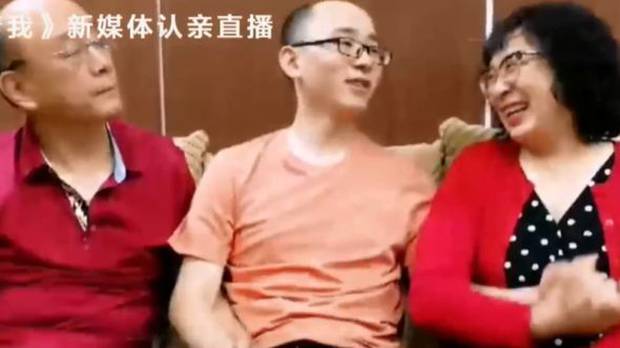