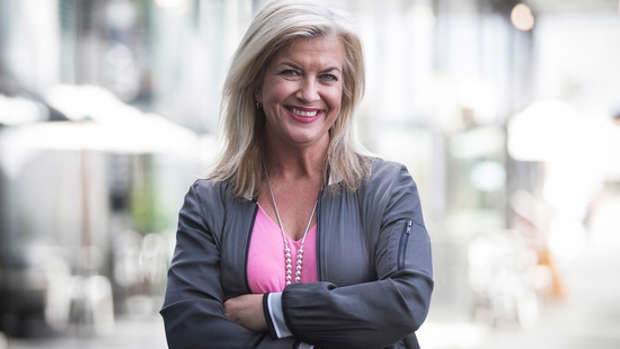 Lorna Subritzky swore at the funeral of her friend who died from breast cancer that she would book her first mammogram the next day.

The promise may have saved her life - she then discovered she had high-grade DCIS in one breast.

Lorna is now an ambassador for the NZ Breast Cancer Foundation, and will be turning on the pink lighting at the Sky Tower tonight for the start of Breast Cancer Month.

"It took the death of Helena to spur me into action," Lorna said.

"I was always too busy, or thought I was . . . I'll never forget making the promise at her funeral that I would book my screening mammogram the following day - and I kept that promise."

"Thank goodness, it was then that my early breast cancer was discovered."

"I can't impress upon women enough how vital this screening is. I'm convinced it quite literally saved my life."

Lorna said it was important to note she had not felt any lumps in her breasts or looked or felt any different. The cancer was caught early but was multiplying rapidly.

"The mammogram can pick up things well before they become a real problem."

Lorna went on to have breast conserving surgery and radiation therapy, and said early detection was important for the sake of the whole family.

"My paternal grandmother had a double mastectomy but succumbed to the disease at just 41 years of age. My father was 12 then, and her passing was literally a life-changer for him as she was a single mother and he then entered foster care."

"The vital importance of early detection was therefore impressed upon me - not just for my own sake, but also for the sake of my family."

Lorna said it was "an incredible honour" to be lighting up a New Zealand landmark.

She was passionate about the NZ Breast Cancer Foundation, saying what it did without funding was "absolutely amazing".

She said eight New Zealand women on average are diagnosed with breast cancer every day.

"The chances are actually higher than you might think. I'm just so very grateful that I made that promise to [Helena] that day and followed through on it."

Being diagnosed was "a little surreal at first", but she never thought she wouldn't beat it.

Lorna finished her radiation therapy in March and is due for a check up "very soon".

NZ Breast Cancer Foundation chief executive Evangelia Henderson said Lorna was an example of how early detection of DCIS and invasive cancer through mammograms could minimise treatment and save lives.

"Lorna is well-known to New Zealand women, and she'll be a valuable voice in getting the message about early detection out to Kiwis everywhere."

Auckland's Sky Tower will be lit up pink until October 14, the start of the Foundation's two-day Pink Ribbon Appeal, as part of the Global Illumination campaign for breast cancer awareness.