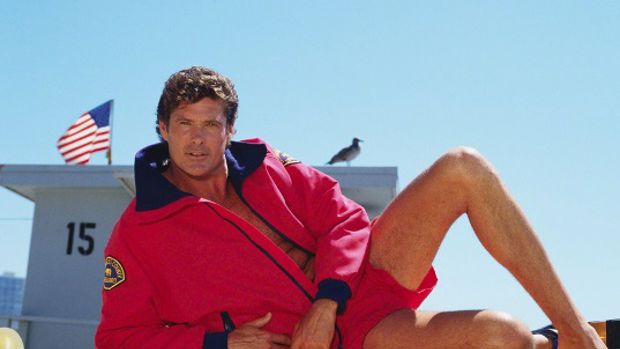 A cameo by David Hasselhoff couldn't save the Baywatch film, which may have cost the brand a television reboot.

"CBS was going to do the show, I had a meeting with them, a location scout," he told The Production Meeting podcast last month.

"Then the movie came out and instead CBS went with (Magnum PI) that year."

Hasselhoff was born in 1952 in Baltimore, Maryland. A shy and gangly youngster who dreamed of a career on the stage, he graduated with a degree in theatre at the California Institute of the Arts .

Hoping to head into musicals, fate took him elsewhere when he scored a role in The Young and the Restless in 1975.

Hasselhoff played Dr Snapper Foster for six seasons on the daytime soap and established himself as a reliable television staple.

Then came his lead role in 1980s hit Knight Rider as Michael Knight, waging war on crime with the aid of his indestructible talking car KITT.

And in 1989 Hasselhoff starred as tanned and toned LA County lifeguard Mitch Buchannon in the series Baywatch.

Cancelled after one season on NBC, the show survived through syndication and ran for 11 seasons until 2001, with Hasselhoff as executive producer.

Featuring an abundance of beach bodies, with Pamela Anderson and Erika Eleniak in the cast, Baywatch attracted a weekly global audience of 1.1 billion viewers.

Hasselhoff appeared in a number of Baywatch specials and leveraged his stardom into cameos in Dodgeball, The SpongeBob SquarePants Movie and two Sharknado films.

On the music scene, he performed his hit single Looking for Freedom at the Brandenburg Gate on New Year's Eve 1989, after the opening of the Berlin Wall, and made his Broadway debut in the musical Jekyll & Hyde in 2000.

Married to third wife Hayley Roberts, he has two daughters.