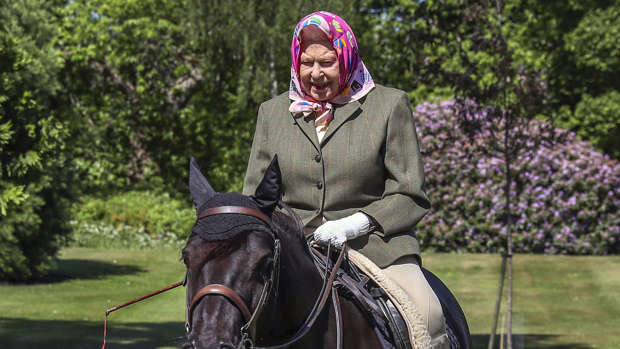 The Queen has been spotted at her home in Windsor Castle for the first time since lockdown began.

And in typical royal fashion, she can be seen riding a pony around the grounds looking well and happy!

The 94-year-old monarch was pictured on a 14-year-old Fell Pony called Balmoral Fern over the weekend. She regularly rides in the grounds of Windsor, which is said to be her favourite royal residence.

The Queen has been isolating there with her husband, Prince Philip and a "scaled-back household staff".

The last public picture of the Queen was taken as she was driven away from Buckingham Palace to her Berkshire home on 19 March.

The Queen has since made two rare televised addresses to the nation during the lockdown. In the first, she said the UK "will succeed" in its fight against the coronavirus and thanked people for following government rules to stay at home.

In the second, she gave a poignant address to mark the 75th anniversary of VE Day, praising Britain's response to the epidemic that has filled empty streets with "love".