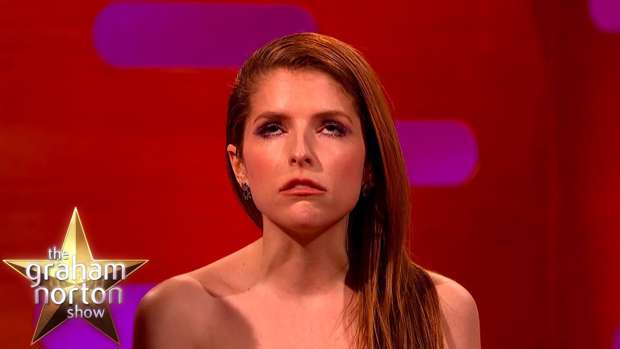 Anna Kendrick once unwittingly mocked a pair of British TV stars because she thought they were faking their accents.

Married couple Steph and Dom Parker appear on U.K. TV show Gogglebox, which sees members of the public review national TV shows from the comfort of their homes.

The pair are renowned for being well-spoken and, during a recent appearance on The Graham Norton Show, Anna revealed she once bumped into them in a hotel lobby and suffered an embarrassing mishap.

"I like that because there are so many accents for such a small country, everyone puts on voices," she said. "I was checking into a hotel once and a man came out and said (in a perfectly clipped, upper-class British accent), 'Do you need help with your bags?' and I thought he was putting on the voice so I said (in the same voice), 'We've been travelling all day, you've no idea.' But they kept talking like that, so I had to slowly transition out of it."

She added: "I was back in the country several years later and they were on TV on Gogglebox because it was Steph and Dom. So, they actually talk like that and I was accidentally making fun of them to their face!"

Anna appeared on the programme to promote her new movie Trolls World Tour, alongside co-star Justin Timberlake. The film hits cinemas from 11 March.