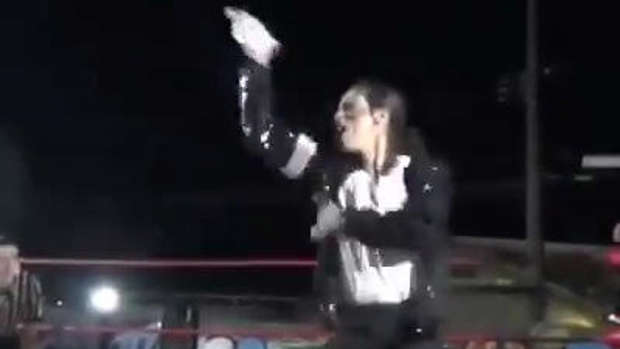 An action shot of the totally real, not at all fake Michael Jackson!

Turns out Michael Jackson didn’t die back in 2009, instead he faked his death and fled to Brazil where he now wrestles with half-naked grownups (emphasis on grownups) for a living.

To be honest, the result is absolutely amazing. Get a load of this highlight reel:

The clip has made Michael Jackson tribute artist Santana Jackson a sudden sensation—the ESPN post alone has 4.9 million views at present. It’s come after years of hard work for Jackson, and a deep love for the man he pays tribute to.

“I always loved Michael Jackson,” he says. “That’s why I became a tribute artist—I thought if I was good enough, I would get to meet him. When he passed, I kept doing this to keep his legacy alive.”

There is no doubt in anyone's minds that this is the real, original Michael Jackson, pretending to be a stunt double. If you disagree or don't believe the facts, then you can just beat it!