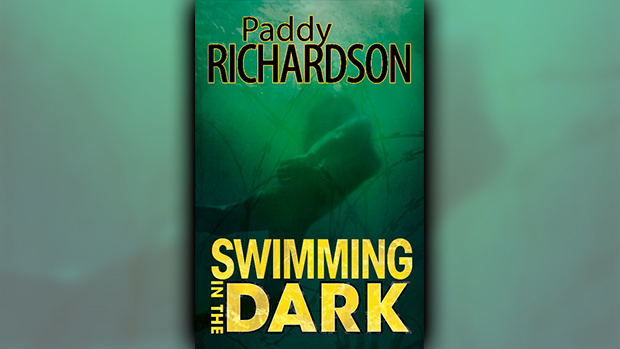 Her superb 2010 family drama / suspense thriller Hunting Blind cemented Paddy Richardson’s reputation as a Kiwi novelist with a remarkable talent for setting and mood – she has few equals for ominous tension-building – and Swimming in the Dark, also located in her home region of Central Otago, evinces further expansion of her palette. Like the earlier book, it features a young girl thrust into a situation to which she should never be subjected, but instead of jumping forward many years to the solving of a crime, Richardson ventures back to the sinister environs of East Germany under the Stasi.

Hunting Blind was inspired in part by the abduction and murder of Teresa Cormack, Richardson has said, and the vulnerability of young girls remains a thematic preoccupation. At 15, Swimming in the Dark’s Serena Freeman is the baby of her troubled family, itself the black sheep of the Alexandra community. The eldest, Lynnie, ran away from the family seven years before, and the three sons are petty criminals well beyond the discipline of their mother, Charmaine.

The inner life of Serena, who privately calls her brothers “dropkicks” and shares her siblings’ frustration at Charmaine’s vanished self-esteem and predilection for unsuitable men, is beautifully conveyed, all yearning and confusion and sharp intellect. But what begins with the promise of bildungsroman takes a sharp turn when someone Serena thinks of as a friend becomes her abuser. Her aloneness at this point, the utter failure of her family to offer any protective element, is profoundly saddening.

Neatly, the narrative shifts first to Lynnie, called back to the family she has worked hard to leave behind, then Serena’s teacher Ilse and her mother, Gerda, who fled East Germany when Ilse was 10. Though Richardson later provides a crisp portrait of life under the Stasi through Gerda’s eyes, the older woman’s avowed hope upon arriving in New Zealand reveals more than any anecdote could: she simply wanted to find a place where every day was the same as the one before.

Remarkably, the shift in perspective and focus is neither irritating nor distracting. While Serena’s voice, and her story, are authentic and compelling, those of Ilse and Gerda are equally so, and Serena’s repositioning as a peripheral character in the second half of the novel feels natural. The author moves easily between the formal, stilted English of the German-born women and the relaxed idioms of Serena and Lynnie, and evokes sympathy for their respective plights. No suspension of disbelief is required: the behaviour of the villain of the piece is all too true to life, and even the grievous ineptitude of Charmaine is of a very ordinary kind.

Richardson’s gift for shaping fully-formed people in a handful of paragraphs is wonderful to observe, and the style of her writing and interest in the complexity of familial relationships is reminiscent of Alice Sebold’s The Lovely Bones. In particular, a passage in which rough justice is bloodily meted out elicited the same shiver of pleasure that accompanied the ignominious demise of the rapist and killer of young Susie Salmon.

Swimming in the Dark is a story of fear and oppression writ large and small, an account of life under a regime of notorious inhumanity mirroring the persecution of a young girl in a quiet South Island town. It represents another triumph for Richardson and for the swelling library of top-flight New Zealand fiction.