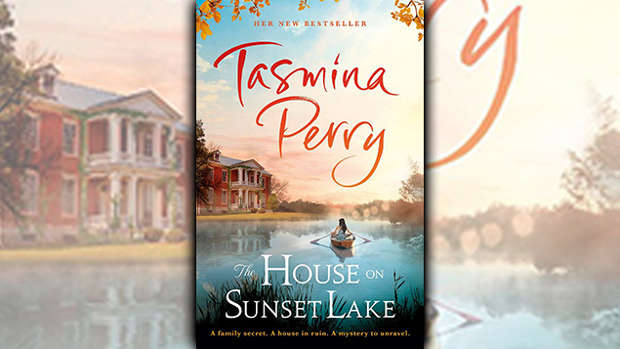 The House on Sunset Lake, a fizzy melodrama by British author Tasmina Perry, concerns a crumbling plantation estate in the American state of Georgia where high-end hotel developer Jim Johnson once spent an eventful summer. Like a dime store Gatsby, Jim is borne back ceaselessly into the past when his boss, the unfathomably rich chief of a global conglomerate, instructs him to diversify their lavish holdings by establishing an asset in the North American market. In a tidy contrivance, the desired property happens to be the family home of Jennifer Wyatt, whom Jim once loved and very quickly lost.

Jennifer now lives in New York City and is married to her childhood sweetheart, Connor Gilbert, whose silver-spoon background contrasts with Jim’s less secure upbringing. Bryn Johnson found early success as a novelist before succumbing to sophomore nerves, and he took his wife Elizabeth and teenage Jim from their London home to Casa D’Or – the house on Sunset Lake – to get his groove back. There he produced a novel that sold well and lifted the family out of its choppy straits, but Bryn, a pompous blowhard who drifts aimlessly through a few scenes, has no time for his son.

At nearly 40, Jim has established a thriving career with financial security, but is reluctant to commit to his luckless girlfriend. If you didn’t know what was coming, Perry has it: “He had to go back . . . He had to get that house, that girl, out of his system. But dare he? After all, “[h]e had opened his heart once before and had it crushed like a tin can under the wheels of a lorry.”

Ah, hell. He’s professionally obligated, so what’s a guy to do? A freighted encounter such as you’ll find in a Nicholas Sparks story takes place when Jim and Jennifer meet again, 20 years later, in New York. It’s purely professional – the house must be purchased from the Wyatt family before it can be re-invented as a sumptuous boutique hotel. Suspense is not the point here, and Perry must roll out her story by placing obstacles in the path of true love: Jim’s introduction to a charming, eligible friend of Jennifer; Jim’s conflict with Connor over the Casa D’Or purchase and another complicated property procurement, which amounts to a lot of face-saving sword-crossing when what they really want to do is have a testosteronic street brawl, and winner gets the girl.

The House on Sunset Lake finds charm in flashbacks to Jim and Jennifer’s young love, which is thwarted by the usual tropes: parents determined to keep the ill-suited pair apart, a manipulative mother set on denying her daughter the happiness she lacks herself, and a boyfriend who will use his money shamelessly.

There’s nary a dull moment as Perry maintains momentum to the last, though the romance-and-danger air of the prologue falls heavily in favour of the former; there’s a sudden, horrible death, but Perry doesn’t write tragedy with any enthusiasm and as a plot device it feels redundant. For fans of Perry and those of her ilk, The House on Sunset Lake is a diverting love story that delivers on its promise.