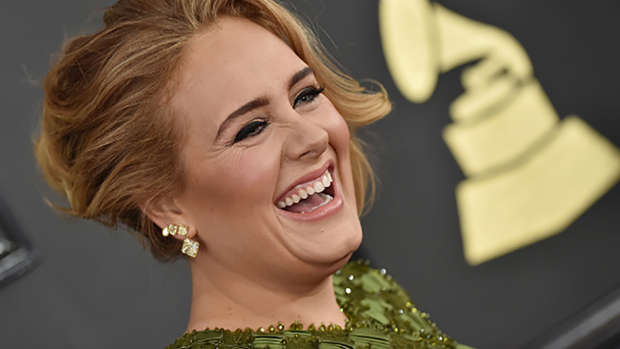 Over the festive period, Adele stunned fans when she proudly showed off her dramatic 45 kilograms weight loss in her Christmas party photos, after retreating from the spotlight in 2017.

And now she's made her first public appearance, sporting an even trimmer figure at Guy Oseary’s Oscars 2020 afterparty.

Photographed in a skin-tight cheetah-print dress, which featured beading all over, the 'Hello' hitmaker looked barely recognisable.

Polish TV personality Kinga Rusin took to Instagram to share the photo in which she poses with the 31-year-old songstress - who split from her husband Simon Konecki in April last year.

"I talked to Adele about … shoes," she wrote alongside the picture.

"Everyone gets slippers at the entrance … I had a conversation with Adele about my high heels (she urged me [to put] on the slippers she had on her feet)."

Earlier this year it was also revealed the star has also been working out with pilates instructor Camila Goodis, who she was introduced to by Robbie Williams' wife Adya Field.

Speaking to The Sun, Camila said: "I trained Ayda for a long time and it happens that they are good friends so I did Adele when she was there in Robbie’s house. I don’t believe she liked exercise much but she has changed her lifestyle and I believe that 90 per cent was dieting."