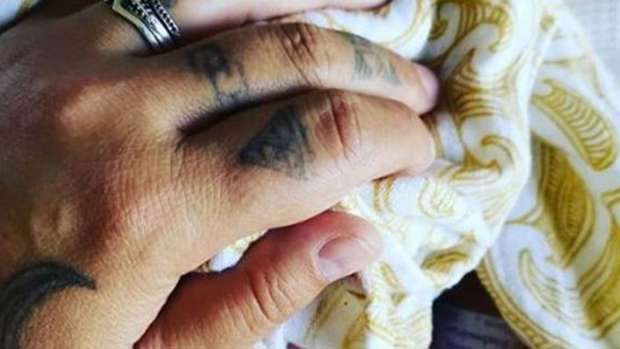 Kiwi singer Anika Moa has just given birth to a baby girl.

"Marigold Tui Grace Utting-Moa - our light and our star is here! Born on our wedding anniversary - Mon Feb 18. We've imprinted like Jacob in Twilight."

Marigold Tui Grace Utting-Moa - our light and our star is here! 💛 Born on our wedding anniversary - Mon Feb 18. We've imprinted like Jacob in Twilight. 🐺

She and her wife Natasha Utting already has a brood of three boisterous boys and they say they have been ready for a girly addition.

However, it wasn't plain sailing for the couple to conceive.

"I tried with my first donor for about a year and a half and nothing happened. I just couldn't get pregnant so, finally, I decided to try another way. Natasha suggested using her donor, who is Soren's father and we both thought that would be so nice that the two kids had the same father."

Barefoot and pregnant! 4 more weeks! Dress by @liannbellis make up free as per and up early with the late preggie energy buzz! #hotdays #offtoschool #lovemywhānau #soontobewinehoeagainafterbreastfeeding

"She texted him saying, 'can we have your baby again?' and he came back saying 'Yay!' He was really keen and there was no waiting around. He got me pregnant first pop with a $10 syringe ... He was like the Uber Eats of sperm donors!"