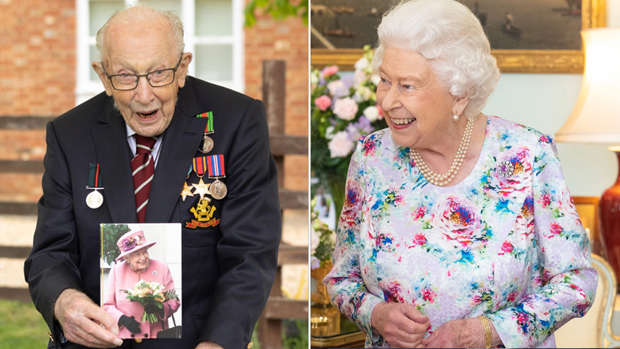 Beloved WWII veteran Captain Tom Moore - who raised over £33million for the NHS by walking laps of his garden – is set to be rewarded with a knighthood!

Moore, who was made an honorary colonel on his 100th birthday, has been personally recommended by British Prime Minister Boris Johnson for the knighthood.

Today I completed my final 10 laps, and although the mission is complete - I am going to keep on going.

Thank you all - now let's continue to support our NHS!

He said: "Colonel Tom's fantastic fundraising broke records, inspired the whole country and provided us all with a beacon of light through the fog of coronavirus.

"On behalf of everyone who has been moved by his incredible story, I want to say a huge thank you. He's a true national treasure."

The Queen has approved the knighthood and it will be formally announced tomorrow.

Last night Moore said: "I am absolutely overwhelmed. Never for one moment could I have imagined to be awarded with such a great honour.

"I'd like to thank Her Majesty the Queen, the Prime Minister and the great British public. I will remain at your service. This started as something small and I've been overwhelmed by the gratitude and love from the British public and beyond.

"We must take this opportunity to recognise our frontline heroes of the National Health Service who put their lives at risk every day to keep us safe."

Under Ministry of Defence protocol, his official title will be Captain Sir Thomas Moore.

My incredible team and uniform picture that I hold so dear. #walkwithtom pic.twitter.com/bjpcgzwTKf

He beat this target by April 16 and his modest target of raising £1,000 was smashed.

He now holds the Guinness World Record for "most money raised by charity walk (individual)."