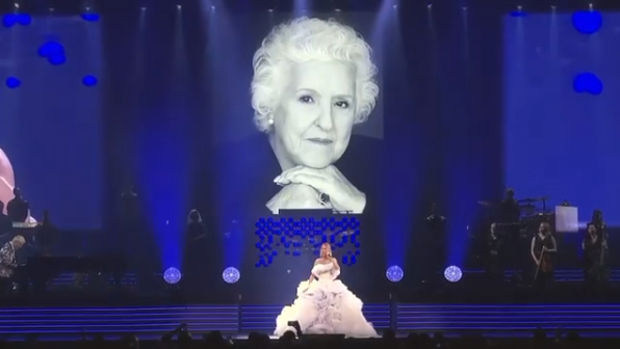 Céline Dion’s mother, Therese Tanguay Dion, passed away at the age of 92 on Friday.

Therese - who was affectionately known in her native Canada as "Maman Dion" - was reportedly surrounded by her family, including Céline, at the time of her passing.

However, the 'My Heart Will Go On' hitmaker did not want to miss her Friday night show, so she went on stage as planned, addressing the sad news with a stunning cover of 'Over The Rainbow'.

"I'm pretty sure that you heard the news about my mum passing away early this morning," she said to the audience.

She went on to reassure fans: "But I'm doing okay and we're all okay."

Celine added that she knew her mother had been ill for quite a while and that she had received a call from her mother's nurse a few days earlier to tell her "her time was coming soon."

"So last night I joined my brothers and sisters in Montreal, and I spent the evening at her bedside.

"We told stories. We sang songs. We hugged each other and we said our goodbyes.

"We are pretty sure that mum waited for us to all be together one more time."

Il n’y a pas une journée où je ne pense pas à ton magnifique sourire. Tu nous manques, merci de veiller sur nous mon amour. Je t’aime, Céline xx... . There is not a day that goes by without me thinking about your beautiful smile. We miss you, thank you for watching over us my love. I love you. Céline xx…

Sadly, René's passed away in January 2016 when he lost his battle with cancer.