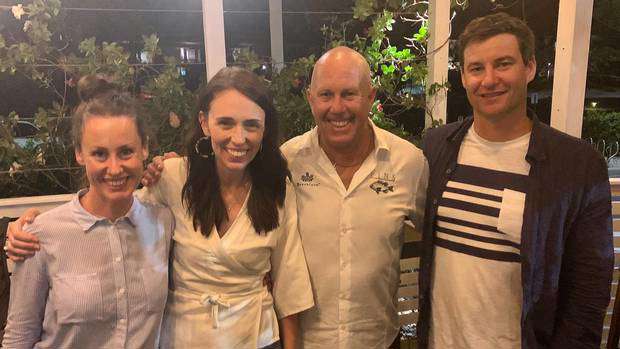 Australians have flooded social media with pleas for Jacinda Ardern to take over as Prime Minister of their country after she was spotted dining with Clarke Gayford at a New South Wales restaurant.

The pair were dining at Fins Restaurant and Bar, in Kingscliff, on Monday night and posed for photographs with the restaurant's celebrity chef, Steven Snow.

After a photograph from the evening was shared to Facebook, the post was inundated with Aussies begging Ardern to stick around and lead the nation, reports the Daily Mail.

"Jacinda there is an opening for you in Canberra hun, just head on down there," wrote one.

"Don't let her leave, I've got a job for her," another user chimed in.

Someone else added: "Run down and grab her please. I'll get Scomo on a flight to NZ."

Others suggested a far more radical course of action, with one person saying "Someone kidnap her and keep here - we need her" and another asking "Can we abduct Jacinda and have her as our prime minister please?"

Ardern's role after the Whakaari/White Island eruption and the Christchurch mosque shootings has been widely compared to Scott Morrison's ham-fisted media appearances during Australia's deadly bush fires, with many citing the Kiwi PM as an exemplar of good leadership.

Australian commentator Sam Clench said that her response to the March 15 shootings was "firm and decisive" and compared her "clear-minded and efficient leadership" to what he described as Scott Morrison's "jarring" references to cricket amidst a national crisis.

This article was originally published at nzherald and reproduced here with permission.