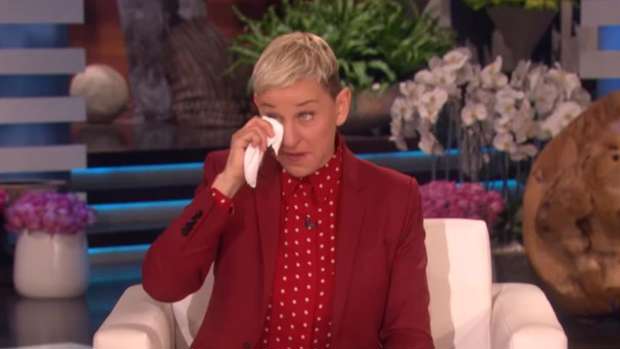 Ellen reminded her audience how fragile life is in the wake of Kobe Bryant's death. Photo / YouTube

Ellen DeGeneres has shared a wonderful message with fans during her show as she broke down over the news of Kobe Bryant and his daughter's tragic death.

The 62-year-old star began the taping of Tuesday's episode of The Ellen DeGeneres Show by reflecting on the tragic death of Kobe Bryant - who died in a helicopter crash along with his 13-year-old daughter Gianna and seven other people on Sunday, US time, which was also her birthday - and urged her fans to "celebrate life" because it is "short".

"That's what I want to talk about: Life is short and it's fragile. And we don't know how many birthdays we have.

"We don't have to have a birthday to celebrate. Just celebrate life."

Ellen grew increasingly tearful as she urged viewers to reach out to their loved ones before it is too late.

The Finding Dory star ended her speech by expressing her appreciation for her wife Portia de Rossi and the people she works with.

She said: "I know that I'm lucky to have a wife who loves me so much, even though I don't have a Grammy. I get to come to work every single day with people who make me laugh. I love everybody I work with."

After news of Kobe's death broke on Sunday, Ellen took to Twitter to express her sadness and offer her condolences to the basketball legend's wife Vanessa and their surviving children, Natalia, 17, Bianka, three, and Capri, seven months.

She posted: "Like everyone, I'm stunned and saddened by the news about Kobe Bryant. My heart is broken for his wife and family."

Many other celebrities have expressed their sadness around the Monday's events via social media, including former teammate and NBA Hall of Famer Shaquille O'Neal.

There are no words to express the pain I’m going through now with this tragic and sad moment of loosing my neice Gigi & my friend, my brother, my partner in winning championships, my dude and my homie. I love you and you will be missed. My condolences goes out to the Bryant family and the families of the other passengers on board. IM SICK RIGHT NOW !

O'Neal and Bryant famously had a fallout in 2004 which lead to O'Neal being traded away from the Los Angeles Lakers.