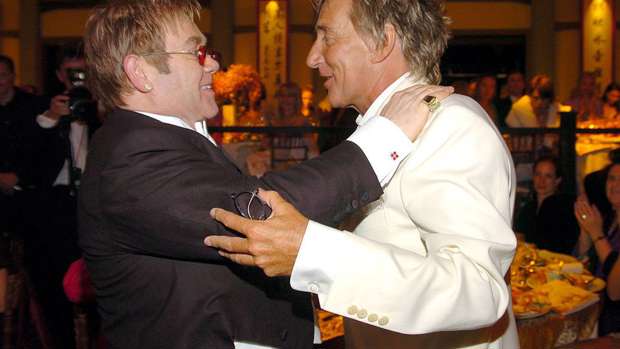 Sir Elton John has slammed the "cheek" of Sir Rod Stewart for criticising his tour.

Rod branded Elton's 300-date farewell tour as "dishonest", and said it "stinks of selling tickets", whilst also insisting he would never announce his own retirement as it was not very "rock and roll".

In the new paperback edition of his autobiography Me, Elton writes: "I certainly didn't feel like I needed a lecture on the feral spirit of rock and roll from someone who'd spent most of the last decade crooning his way through the Great American Songbook and Have Yourself A Merry Little Christmas."

It’s here! I’m so delighted to release the paperback edition of ‘Me’ into the world. There’s a brand new chapter that covers the highs and lows of the last year and I hope you enjoy reading it as much as I have enjoyed writing it 🚀 #EltonJohnBook

Before adding: "What's more, I thought he had a f****** cheek, complaining about me promoting a tour while he was sat on a TV show promoting his own tour."

Responding to his comments, Rod said: "Elton doesn't like me at the moment. I was bang out of order. Correct, but bang out of order ... They [the show's producers] make sure you get drunk before you go on. Four big shots of neat vodka and with me being a butch man, I knocked them all back. I said that 300 dates in three years sounded a bit money-grabbing to me. Look, I know where he's coming from. He's just got two kids very, very late in life but I'm planning my tours around my kids. I think he'll miss it. I can't wait for the next show."

And Elton was disappointed to fall out with Rod.

He shared: "I had no idea what I'd done to upset him so much. Which was ironic, given the hours I'd put in over the years deliberately trying to annoy him."