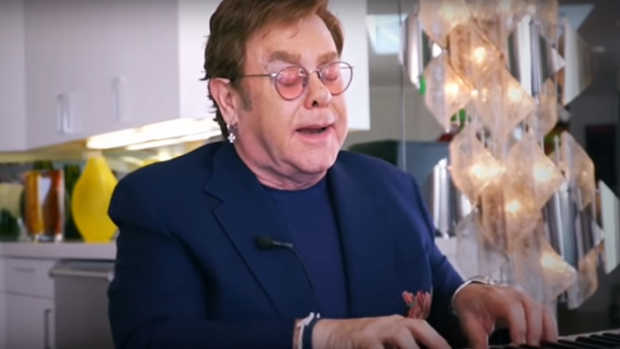 But while the entire hour of his "living room" concert was great, with the musicians performing ad hoc from their homes, the real cherry on the top was the surprise performance from Elton himself ...

At the end of the evening, after claiming he didn't have a piano in his house, the legendary singer sang an impromptu yet moving rendition of 'Don't Let the Sun Go Down On Me' from behind a keyboard.

He explained the keyboard belonged to his sons, who take lessons on it, and made sure to clarify, "I don't normally play a keyboard like this."

Elton dedicated his brief set to "the incredible heroes mentioned before, so here goes."

Earlier in the evening, the Oscar-winner had kicked things off by saying: "Here we are, all together at home. You've got your family and loved ones, and I've got mine close too. ... We're taking care of each other through this crisis.

Less than 2 hours to showtime! I am hosting the @iHeartRadio Living Room Concert For America on @FOXTV TONIGHT! @davidfurnish and I are standing by....📹📹🚀🚀 We are raising money for @FeedingAmerica and @1strcf as we enjoy performances and contributions from some amazing artists! @billieeilish @finneas @aliciakeys @ladygaga @mariahcarey @samsmith @backstreetboys @thetimmcgraw @camila_cabello @theellenshow @hermusicofficial @lizzobeeating #DaveGrohl @billiejoearmstrong Watch on your local FOX channel or on the FOX NOW app. #iHeartConcertOnFOX

"Let me tell you what's going to keep us together: All the goodness that's happening in the world. There's doctors, nurses and scientists on the front lines. They're living proof that most superheroes don't wear capes ...

"And since we're all hunkered down together, until those days greet us again, we thought we'd put together a little show for you.

"For the next hour, we'll do what we can to lift your spirits ... say hi and tell you we love you."

You can watch the full set below: