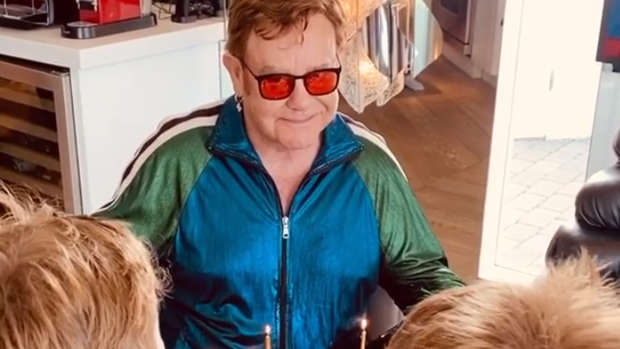 Yesterday Sir Elton John celebrated his 73rd birthday in quarantine with his family amid the coronavirus pandemic.

While the legendary singer usually likes to keep his two sons out of the spotlight, recently he has been sharing more of his private life with fans.

Taking to Instagram, the proud dad gave his followers a rare glimpse of Zachary, nine, and Elijah, seven, by sharing a video of them adorably singing him 'Happy Birthday.'

Alongside the video, the 'Candle In The Wind' hitmaker wrote: "Grateful for the best birthday ever with my family 🙏🏻❤️🎂🚀."

Grateful for the best birthday ever with my family 🙏🏻❤️🎂🚀

The video comes after Elton revealed he is having a "fantastic" time with his sons amid the coronavirus pandemic.

The 72-year-old performer has postponed a string of tour dates due to the contagious condition and is making the most of having to spend most of his time at home with his family.

He said: "I don't think realistically speaking that we, artists, can expect to go back on the road [before summer].

"To be honest with you, it's great to be able to spend this much time with my boys because normally I don't, even though they've been on the road with us since November in Australia and New Zealand. It's, this is 24/7 with them and it's fantastic."

However, the Oscar-winner also joked his enjoyment of family time may change if they remain under lockdown for a long time.

He quipped: "I mean I'm saying that after a week, check on me in about three weeks."