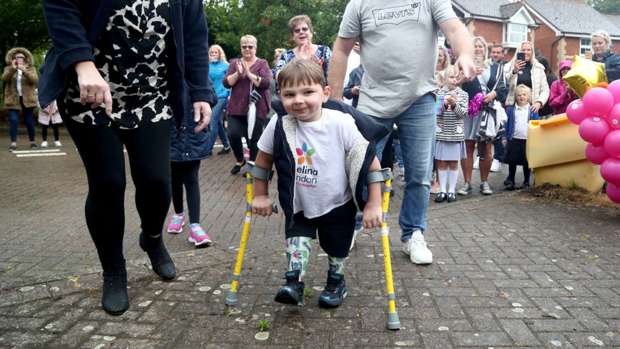 Tony Hudgell is a name that we'll be hearing for many years to come.

The little legend from Kent in the UK has managed to raise over 1 million pounds for the NHS, by walking 10kms on his prosthetic legs.

Both of Tony's legs were amputated soon after birth after suffering physical abuse from his biological parents. The injuries led to sepsis and multiple organ failure, with his condition becoming so severe that he had to have both limbs amputated at the knee.

In doing so, Tony raised over a million pounds which will be presented to the hospital which saved his life.

Little Tony has received a mountain of praise so far, but possibly none more special than from The Duke and Duchess of Cambridge.

#GoTonyGo! We are so proud of the incredible courage and determination shown by Tony Hudgell, who is aiming to complete a 10km walk to raise funds for Evelina London Children’s Hospital, of which The Duchess of Cambridge is Patron. Tony suffered injuries as a baby which meant that he had to have both of his legs amputated in 2017. Having received his first pair of prosthetic legs earlier this year, Tony vowed to walk 10km throughout June. Visit @tony_hudgell_bears_journey to find out more about Tony’s journey, inspired by Captain Tom Moore, to raise funds and thank the hospital who have cared for him since he was a baby. Photo © David Tett photography

"We are so proud of the incredible courage and determination shown by Tony.." the Duke and Duchess said via their Instagram page.

What an incredible story, and we certainly hope to hear more from Tony in the future.