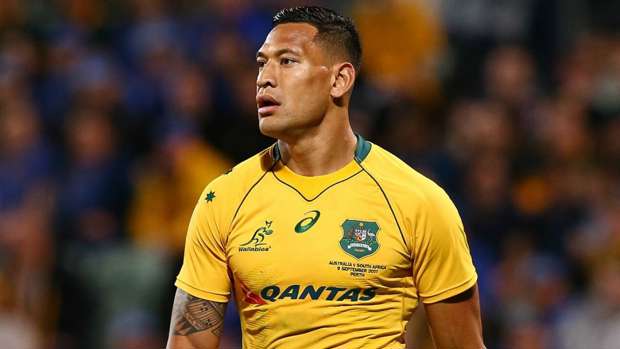 Former Wallabies star Israel Folau has sparked outrage after claiming the bushfires that have devastated Australia are God's punishment for legalising abortion and same-sex marriage.

Speaking at The Truth of Jesus Christ Church in Sydney, Folau delivered another sermon taking aim at homosexuals.

During the 10-minute recording, the 30-year-old says the timing of the bushfire crisis is no coincidence but only a taste of God's judgment should nothing change.

"The message I mainly want to speak about today is mainly for the people who are outside within the world," he began.

"I've been looking around at the events that has been happening in Australia, this past couple of weeks, with all the natural disasters, the bushfires and the droughts."

He then read from the Book of Isaiah in the Bible, The Lord's Devastation of the Earth: "The earth is also defiled under its inhabitants, because they have transgressed the laws, changed the ordinance, broken the everlasting covenant.

"Therefore the curse has devoured the earth, and those who dwell in it are desolate. Therefore the inhabitants of the earth are burned, and few men are left."

Folau then links the passage to the bushfires and drought and the legalising of same-sex marriage and abortion.

"I just want to see the events that have happened here in Australia in the last couple of years," he said. "God's word says for a man and a woman to be together, one man and one woman to be in the covenant of marriage together.

"Abortion, it's okay to murder and kill unborn children and they deem that to be okay.

"Look how rapid these bushfires, these droughts, all these things have come in a short period of time, do you think it's a coincidence? God is speaking to you guys — Australia, you need to repent and take these laws and turn it back into what is right by God."

Folau had his $4 million contract torn up by Rugby Australia in April after he was found guilty of a code of conduct breach for saying "hell awaits" gay people in a social media post.

He has since launched legal action, reportedly seeking $10 million in damages, believing he has been discriminated against because of his religious views.

Folau is set to return to court in December ahead of a trial in February 2020 if mediation is unsuccessful.