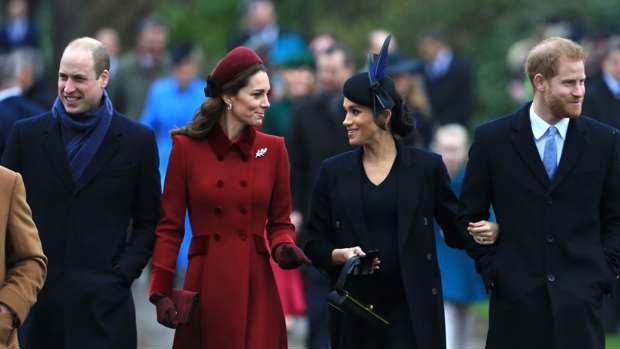 Kate Middleton is reportedly attempting to mend the feud between Prince William and Prince Harry.

According to royal author, Phil Dampier, the Duchess of Cambridge is trying to "bring the family together," and feels sorry for her sister-in-law, Meghan Markle.

"Behind the scenes I'm told Kate is doing her best to bring everyone together and help Meghan," Dampier told The Sun.

Harry talking about his 'rift' with brother William: An African Journey. Video / ITV

"None of them want to let the Queen down so Kate is trying to patch things up in private.

"I'm told she has reached out to Meghan and spoken to her on the phone. Kate feels sorry for her and knows that Meghan is struggling."

The claims follow the explosive documentary in which Harry confirmed persistent reports of a rift with his older brother.

Tom Bradby interviewed the Duke of Sussex and his wife, Meghan Markle, several times during their recent tour of South Africa as part of his documentary, Harry and Meghan: An African Journey.

When Bradby brought up the awkward subject, Harry confirmed they "don't see each other as much" these days.

"Umm … part, part of this role and part of this job and part of this family being under the pressure that it's under, inevitably, stuff happens. But look, we're brothers, we'll always be brothers — and we're certainly on different paths at the moment," he replied.

Having attended the 10th Annual One Young World opening ceremony on Tuesday, The Duchess of Sussex was joined today by The Duke of Sussex for a round table discussion on gender equity with OYW and Queen’s Commonwealth Trust young leaders. Over the last few days, these young leaders became @OneYoungWorld ambassadors with the intention to return to their communities and further existing initiatives to help change the world for the better. This year OYW partnered with the @Queens_Commonwealth_Trust, of which The Duke and Duchess are President and Vice-President respectively, to provide scholarships to young leaders driving positive social impact in the Commonwealth. This was the most exciting collaboration between two groups The Duchess is passionate about and has been working with for some time. For more information and highlights from the week and how you can support these incredible leaders and their initiatives, visit @OneYoungWorld Photo © SussexRoyal / PA

Bradby, who has known Harry personally for years, elaborated on the Duke's comments during an interview on Good Morning America on Wednesday.

"All brothers have good days and bad - but I think the real issue here is not so much interpersonal issues - that's something that's better to remain private because, like all sibling relationships, it's complicated," Bradby explained.

"But the really important thing, the difficulty they have is that they have almost two entirely parallel narratives about a whole bunch of stuff."

He went on to explain that among the most significant are their opposing views on Princess Diana's death.

"Harry feels quite simply that the press killed his mother and is now in danger of trying to damage his wife. William has a more nuanced view of that — yes, their mother did have a very hard time, but she also made a mistake in allowing the press in and is absolutely adamant that that shouldn't happen," Bradby said.

"(William) thinks his brother is sometimes too open and then sometimes tries to close up - and that doesn't work."