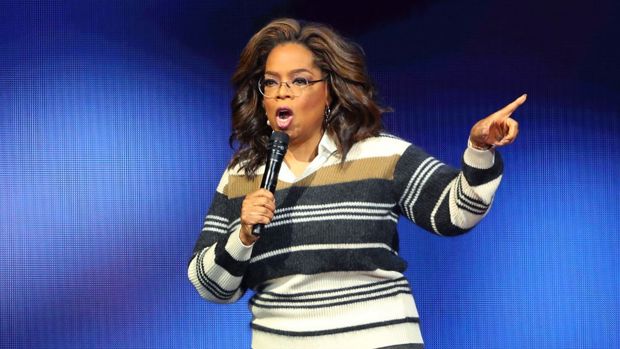 Oprah is in full support of the couples decision / Getty Images

Oprah Winfrey supports the Duke and Duchess of Sussex's decision to step out of royal life "1,000 percent".

The 65-year-old media mogul - who was a guest at the couple's wedding in May 2018 - insisted the couple had clearly taken a lot of time to think about forging a new life for themselves and it was such a huge choice for Prince Harry in particular so she thinks they deserve to be backed for making the move.

She told TMZ: "I support them 1,000 percent. You know why I support them? I support them because I believe, when you have thought about this as long as they have -- and even in the Queen's statement [she] says, 'This has been going on for months,' these discussions have been going on for months -- and when Harry said in that charity statement the other day [that] he had to make the decision to move forward in peace with his new family, who doesn't feel what that takes to make that decision to give up everything you've known your whole life to say I'm going to choose this new life or what I believe to be the truest vision for myself?"

The 'A Wrinkle in Time' star went on to criticise those who have been negative about the couple's decision as they are only doing what they think is best for themselves and their eight-month-old son Archie.

Thank you @stellamccartney ! Realized Friday morning the beige dress I was planning to wear to Royal ceremony would photograph too “white” for a wedding.Her team did this overnite. Hat is vintage @philiptreacy been in my closet since 2005 with new feathers. OMG was this an extraordinary day! #Harry&Meghan #RoyalWedding #Lovedeveryminute

And Oprah's best friend, Gayle King, thinks some of the speculation surrounding the couple's decision has been "very unfair".

She said: "They didn't make the decision in a vacuum. There were a lot of conversations. That's why I thought it was very unfair to say the Queen was blindsided. Even the Queen's own statement said these conversations have been going on for months."

Oprah recently dismissed suggestions she had influenced the couple in their decision to step back from royal life and divide their time between the UK and North America.

She said: "I care about them both and support whatever decisions they make for their family.

"Meghan and Harry do not need my help figuring out what's best for them."