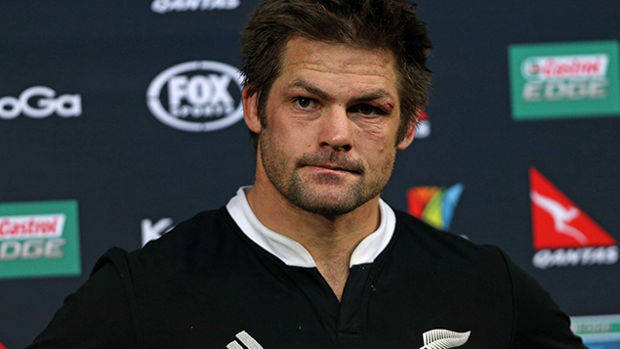 Richie McCaw has revealed some of the psychological demons he had to battle during his rugby career.

Speaking with Movember's Robert Dunne on the A Few Good Men podcast, McCaw opened up about going through periods of anxiety and doubt while playing for the All Blacks.

The All Blacks great recalled a moment before the 2011 World Cup final where he feared he would get dumped as captain of the side if they didn't take out the trophy.

"It only went through my mind once, but the morning of the final – it was a nine o'clock game so we had a long day to fill – I was lying on the bed and I was like 'the reality is if we don't win today, this will be my last game as captain'," he said.

"And now people could argue whatever but you think about it, someone who's been captain at two World Cups and haven't won it, they're not going to give you a third go.

"But I was like 'wow this is unhelpful' and that was the last time I had even considered it. But you know that was reality."

McCaw, who led the All Blacks to two straight World Cup wins in 2011 and 2015, also opened up about a difficult period while recovering from a head knock early in his career, where he "was in a bit of a hole".

"I was thinking, I'm never going to be able to play rugby again. You get the old negative loop. A lot of people probably understand when you get into that mindset, it's hard to see a way - how you're going to get yourself back to where you were. I was probably like that for a little while. It took a while to get myself back and focusing on getting myself fit again ... and getting back to playing.

"I remember the cloud lifting when I got myself back on the field, which sounds a bit terrible that it took it to do that and look back and go 'I was in a bit of a hole'."

The 38-year-old said going through those struggles helped him understand that rugby is so much more than just a physical sport, and that those experiences have also helped him in life after rugby.

"Once I got back playing and got past all that, it made you really appreciate what you were doing. And actually realising that just going and training hard and going and playing, there's a bit more to making sure everything works.

"And even like performing under pressure, that's not just a matter of training hard or on the field, there's all sorts of things that you can do to become more resilient, lift your threshold of what you can handle and stuff like that.

"And that's I guess something that really intrigued me and that I put a lot of work into probably in the last three years."

A new podcast series with the Movember Foundation, A Few Good Men, chews the fat with some great New Zealanders, digging into what makes them tick, their passions, their experiences and their advice.

Subscribe to the A Few Good Men podcast on iHeartRADIO HERE.