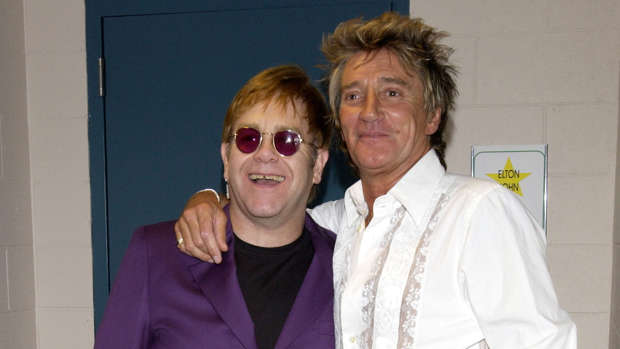 It seems the feud between Sir Rod Stewart and Sir Elton John won't be thawing out any time soon ...

The legendary singers fell out at some point last year after the Scottish singer poked fun at the Rocket Man's retirement tour, as well as his biopic.

And now the 75-year-old rocker claims he has tried to extend an olive branch, only to be snubbed. The 'Forever Young' hitmaker opened up about their relationship during an interview on Chris Evans' How To Wow podcast.

He admitted: "We don’t talk to each other anymore – big falling out."

He claimed the 'Tiny Dancer' singer "had the hump" last year after he said his three year Farewell Yellow Brick Road world tour was "not rock 'n' roll."

The 'Maggie May' singer then revealed that he had invited Elton and his family to his home in Essex, where he has a football pitch in his grounds - hoping that some time on the pitch together would help them bury the hatchet. "Last time I emailed him I said, 'I've got this football pitch, would you like the boys to come up?' You know, cos they both love football."

But, unfortunately, Elton never replied, which upset him as they used to be "real close."

Rod and Elton first met around 50 years ago, and they were even neighbours in London back in the Seventies.