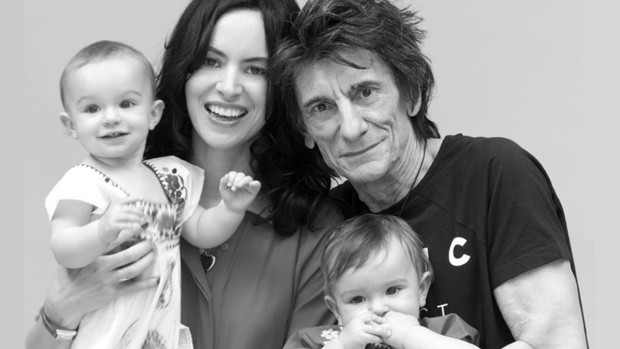 While Ronnie Wood usually likes to keep his children out of the spotlight, this week he gave fans a rare glimpse at his twin daughters, Gracie Jane and Alice Rose.

Much to the delight of his followers, the Rolling Stones rocker made sure his daughters had a very special fourth birthday by sharing a sweet snap of them together.

Taking to social media, the 'Start Me Up' hitmaker posted a snap of the girls laughing together in a garden as they wear matching pink skirts and jumpers with the number four on.

Alongside the family snapshot, the doting father wrote: "Happy 4th birthday to my beautiful Alice and Gracie."

The 72-year-old rock legend and his wife Sally Humphreys have previously spoken about their twins in an interview with HELLO! magazine.

Ronnie told the mag: "Any time I'm with her and the girls, that's the best for me, nothing tops it.

"When the twins come into our bed and we're all snuggled up together, that, for me, is wonderful – my idea of heaven. It's special. The girls are so cuddly and gorgeous. I'm a lucky man."

As well as Gracie and Alice, Ronnie is also a dad to daughter Leah, and sons Jamie, Tyrone and Jesse.

Such a beautiful family!