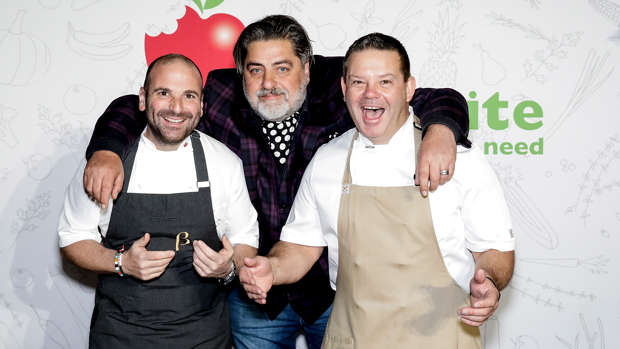 After 11 years on our television screens, Australia's Network 10 announced they had pulled the plug on Matt Preston, Gary Mehigan and George Calombaris earlier this year, confirming the trio would not be returning to MasterChef next year.

The news came following a petition called for Calombaris to be sacked from the popular cooking competition after it was revealed he had underpaid staff working for his Melbourne restaurant empire by more than $7.8 million.

The 40-year-old celebrity chef apologised for his actions, but that did not stop more than 22,000 people signing the petition.

But now the three new Masterchef judges have been revealed ... and Australia is not happy.

Jock Zonfrillo, Melissa Leong and Andy Allen will be the new faces of the cooking franchise.

You may remember Andy Allen as the winner of Masterchef season four. Since taking home the giant silver plate and a stack load of cash, he has been travelling Australia and the world pursuing his culinary curiosity.

"I entered this competition as a contestant in 2012. Somehow I won it and then I went out into the big, bad, wide world of hospitality. To be asked to be a judge – and to come full circle back to MasterChef Australia – is really flattering and really special.

"I’m stoked because it means that I’ve done the hard work to be here. You don’t ask Joe Blow to be a judge on MasterChef Australia."

Jock Zonfrillo is a chef and the owner of Adelaide's Orana and Bistro Blackwood. He was named Australia’s Hottest Chef in 2018 and has hosted television shows including Nomad Chef, Restaurant Revolution and Chef Exchange, as well as appearing in the MasterChef Australia kitchen as a guest chef across three seasons.

"When I think of MasterChef Australia, I think of discovering new talented cooks with fresh ideas and creativity.

"There hasn’t been a season yet where I haven’t been surprised by just how talented some of the undiscovered cooks are, so much so, that many of them have worked in my kitchen over the years. I can’t wait to get in that kitchen," Jock said about joining the show.

To all of our fans ‘thank you’ To the team that makes MasterChef ‘thank you’ and to all of the contestants that we know and love, we are all part of a very exclusive club and what a journey what an experience. To explain: ‘It was time to move on, have more free time to explore our own creativity’ It was never about the money and never will be about the money. We couldn’t agree on the term of the new contract for 2020 and season 12. Something we felt very strongly about. The opportunity to work with Matt and George has been a blessing and something I cherish. Working together will continue to be the most important thing for us.....the three musketeers.......🤗 @mattscravat @gcalombaris @masterchefau #masterchefau #foodies #foodiesofinstagram #homecooks #homecooking #masterchef

While Melissa has a long list of jobs on her resume; a food and travel writer, food media consultant, radio broadcaster, television presenter, MC and cookbook editor.

"It goes without saying, that it is an honour to be passed the baton and asked to help bring the next chapter to life on a show like MasterChef Australia.

"It came as a huge surprise for me, and is, without a doubt the opportunity of a lifetime. I am really looking forward to getting stuck in!"