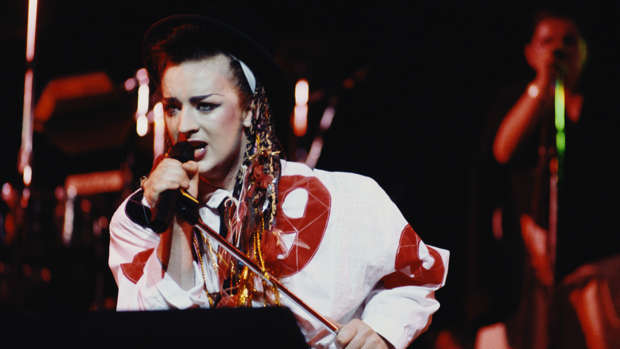 Boy George is set to be the subject of a new biographical film and he knows exactly who he wants to portray him on the big screen!

In an interview, Boy George revealed that he would want Game of Thrones star Sophie Turner to play him, due to her striking resemblance to him.

And what does Sophie think about the surprising potential casting?

Taking to Twitter the 23-year-old revealed that she is "so down" with playing Boy George in the biopic.

I’m SO down @BoyGeorge https://t.co/6Ci0VDfmtB

The Culture Club frontman is excited to be the subject of a movie about his life and said one of the most "interesting" casting suggestions that have been pitched to him so far have been for the Game of Thrones star to portray his younger self, which he thinks is a great idea.

Speaking to Nova's Fitzy and Wippa in Australia, he said: "It's going ahead. It's MGM. It's being written and directed by Sacha Gervasi, who did My Dinner with Hervé. Who is very cool."

Responding to British Vogue's tweet about the news, Sophie - who is married to Joe Jonas - admitted: "I’m SO down @BoyGeorge."

The Karma Chameleon hitmaker also suggested he didn't care if the movie wasn't entirely truthful because he loves reading "ridiculous" rumours about himself.

He said: "In our game, there is always stuff that is written about you that is so ridiculous. That you say, 'I don't mind it though, it makes me sound more interesting.'

"He sleeps upside down on the roof. He only lives on lentils, that kind of stuff. I think it just makes a great picture."

It was previously reported that the untitled film will chart the 57-year-old singer's childhood in a working-class Irish family through his rise to stardom along with Culture Club in the 1980s.

As well as Sacha - who has previously worked on Anvil! The Story of Anvil - will write and direct the film based on the life of the 57-year-old singer, with Kevin King Templeton and Paul Kemsley producing, and George and Jessica de Rothschild on board to executive produce.

The film plans come after Boy George previously said he struggled with trying to have a "normal life" whilst also being a celebrity at the height of his fame in the 80s.

He said: "It's all fun at the beginning because you're being carted everywhere in limousines and trucks and then when you start wanting to go out in the real world, it doesn't quite work. It takes years to get your head around how to have some sort of normal life whilst also enjoying the spoils of being Boy George. I think I've got that balance now. If someone comes up and wants a selfie, I'm not going to be rude or hostile or arsey. I just pull a silly face. If in doubt: pout."

But despite his hardships, Boy George says he's always remained positive about his life.

The Do You Really Want To Hurt Me singer added: "No, I've always been positive. I wouldn't still be here if I wasn't. I think you're always who you are, but life distracts you, particularly because of fame - everybody treats you different, therefore you end up with a distorted idea of who you are."

It is not yet known when the movie will be released.