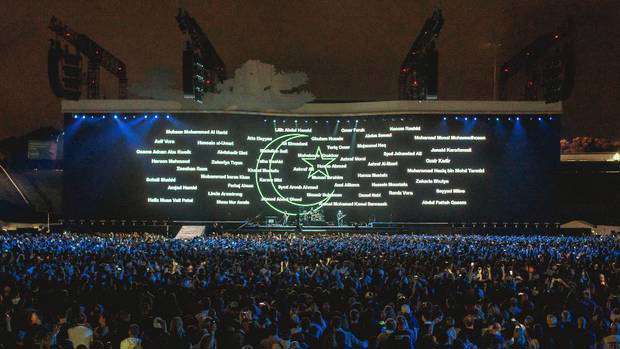 Irish rock band U2 have remembered the 51 people killed in the Christchurch mosque shootings during their two massive Auckland gigs.

The rockers are in New Zealand for the opening nights of their Joshua Tree Tour, named after their famous 1987 album of the same name.

Closing the night with their 1991 track One, the names of those killed on March 15 were displayed on the massive screen running the length of the stage.

The touching display was just one of many emotive moments from U2's first New Zealand gig in nine years. Earlier in the night, frontman Bono paid an emotional tribute to his former Kiwi roadie Greg Carroll.

Carroll died in a motorcycle accident in 1986, having befriended Bono two years prior and subsequently toured with the Irish rock group.

And it was Bono's rendition of One Tree Hill, written after Carroll's death, that had the biggest impact of the night for the 40,000-plus strong crowd.

"We sort of adopted [Carroll], or perhaps it was the other way round," Bono said. "We were very grateful for his companionship over those precious times. "He was taken from us too soon, but in a way he's still very present."

Ardern was one of many influential Kiwi and international women featured on screen during Ultra Violet (Light My Way).

On The Joshua Tree Tour the band play their famous album in full every night, as well as a smattering of other hits from their diverse career.

As well as hit after hit, it's clear the band were also keen to put on one hell of a show.

Article originally published in the NZ Herald and re-published here with permission.