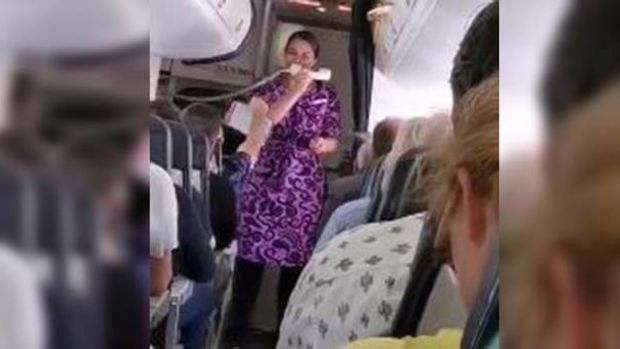 An Air New Zealand air hostess has wowed passengers on an aircraft after singing for them following a small delay.

Passenger Ngapera Haitana was flying on Air New Zealand NZ 8155 from Auckland to Rotorua on Thursday when the flight was delayed by 30 minutes.

But instead of letting passengers waiting in silence, the hostess decided to provide them with some entertainment in a bid to lift morale.

While running through the safety instructions, introduced herself and announced she would perform for them.

Telling passengers her name was Cecilia, she then grabbed the microphone and belted out the Simon and Garfunkel classic, Cecilia.

Passengers were seen fanning Cecilia with their instruction booklets before giving a round of applause.

Haitana told the Herald Cecilia's performance lifted the spirits of passengers after a hard day.

"She introduced herself and sang her song as a kinaki [an ending to her introduction]. It was straight out cool!

"She was charming, gracious, vivacious and the passengers appreciated her after a long day and a delayed flight."

A friend of Cecilia's also told the Herald it's not her first rodeo, saying "she's so good, passengers love her".