The young royals have a knack for stealing the show at the Trooping The Colour ceremony at Buckingham Palace - and this year was no exception.

Savannah Phillips, the Queen's great-granddaughter, was not impressed with Prince George's endless chatter and slapped a hand over his mouth to keep him quiet.

Meanwhile Princess Charlotte burst into floods of tears during the celebration to mark the Queen's 92nd birthday, reports Daily Mail.

Seven-year-old Savannah, the daughter of Peter Phillips and granddaughter of Princess Anne, made a shushing motion at little George.

It appeared the young royal couldn't contain his excitement as he watched the planes zoom overhead.

But the Duke of Cambridge, standing behind them, looked unamused by the pair's antics on the balcony and gave them a very disapproving look. 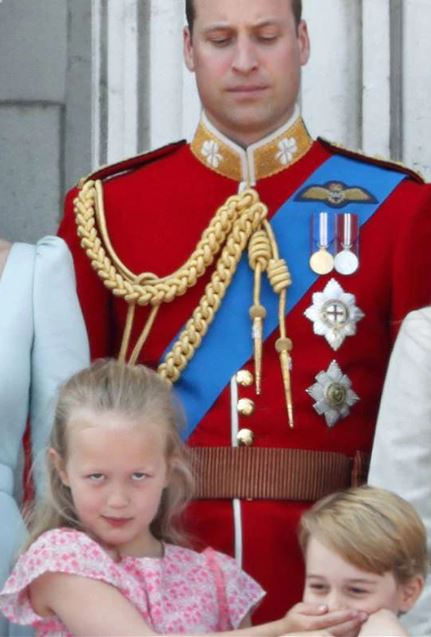 Meanwhile, the Duchess of Cambridge had to step in when Princess Charlotte became overwhelmed by all the excitement.

The youngster burst into tears and had to be comforted by her mother, who tenderly picked her up and gave her a cuddle.

But ever the professional, little Charlotte quickly composed herself.

Peter Phillips, Savannah's father, is the only son of Princess Anne and her first husband Mark Phillips.

Like the Duke and Duchess of Sussex, he married his Canada-born wife Autumn at St George's Chapel in Windsor in 2008.