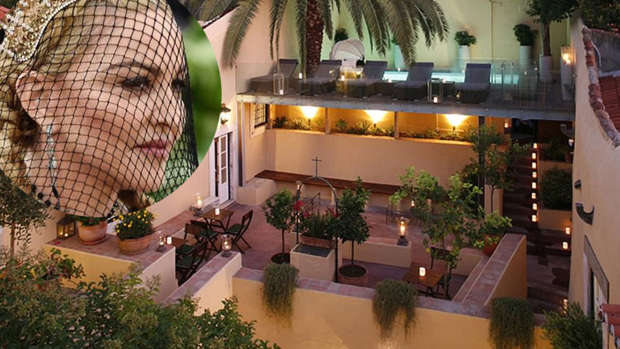 She's relocated her family to an 18th century palace in Lisbon, which was formerly a boutique hotel, but life inside Madonna's 12 bedroom home blends the luxury with the everyday.

The mother-of-six shares regular glimpses into her new life in Portugal on Instagram, showing her youngest daughters Estere and Stella, five, making a birthday cake in the kitchen and gathered around the piano with their older brother David, 12, reports the Daily Mail.

Madonna had a choice of 12 rooms and suites to choose from and opted for a bedroom with a plush green velvet headboard, hanging a framed picture of Debi Mazar hanging above on the wall.

The actress has been friends with Madonna, 57, for more than 30 years and appeared in several of her videos, including Papa Don't Preach.

A priceless memento from her pal Michael Jackson - a signed pillow - takes pride of place on the bed.

The late popstar wrote a message on the white cover, referring to the "filthy, dirty press".

He added: "They tell lies. Ban all the tabloids. I love you all so much. You will forever be in my heart."

The Like A Virgin singer is now dividing her time between Portugal, the US and UK, after her son David Banda - who Madonna adopted from Malawi in 2006 - joined the Benfica youth football academy earlier this year.

Madonna is also mother to daughter Lourdes, 21, who is believed to live in America and son Rocco, 17, who resides in London with his father Guy Richie and stepmother Jacqui Ainsley. The pop star adopted daughters Mercy, 11, and five-year-old twins, Stella and Esther, who live with her in Lisbon.

Opulent baroque furniture and Chinese rugs are in keeping with the surroundings, giving the property the feeling of a typical stately home.

However, her home still bears all the hallmarks of a house where young children live, with Stella and Esther's artwork decorating the walls.

Among a scattering of art books, including volumes about Frida Kahlo are a plethora of framed pictures of Madonna with her two youngest daughters.

Another appears to show the singer's son Rocco, who moved in with his father permanently in 2016 after Madonna lost a custody battle, with his younger siblings.

Meanwhile, the kitchen has a rustic feel with white tiles on the walls, copper pans on display and a plethora of baskets hanging from the ceiling.

When your Chess Game is Better than Everyone else's and you just have to lie down ! 🐶😂🐶