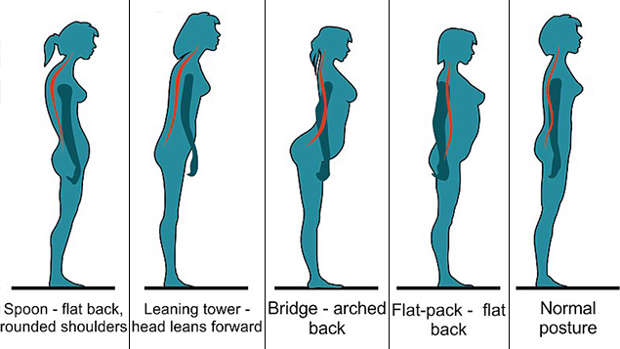 Are you as straight-backed as a ballerina, or as hunched as a dinosaur?

Your 'posture profile' can identify whether you will suffer from aches and pains in later life, the British Chiropractic Association has said.

People whose heads lean forward are most likely to suffer back pain, its survey found.

Whether you are a 'spoon', 'bridge', 'leaning tower' or 'flat-pack' will determine your risk of having problems later.

While previous indicators have focused on body shapes, with larger-breasted women and 'apple' shapes being seen as a warning sign, this new research shows posture could be key in preventing back pain.

A quarter of women suffer pain lasting between one and three days starting at the relatively young age of 34, the survey found.

'Leaning towers' - women whose heads lean forward - are most likely to report pain, with almost six in ten with this posture already suffering and three in ten having daily twinges.

Being a 'bridge' with an arched back was the second worse posture, followed by a 'spoon' position with rounded shoulders but a flat back.

And a change in posture can be far less demanding than a crash diet or boot camp-style exercise programme.

'Flat pack' ladies, who keep their backs flat are the most likely to avoid pain with a fifth reporting they have never suffered back or neck aches in their lives.

Tim Hutchful, a registered chiropractor and member of the British Chiropractic Association, said women looking to stave off back pain should try to keep their head and ankles in line.

He said: 'Rather than worrying about being an apple or an hourglass, we want people to think about what they look like from the side.

'Paying closer attention to your body's side profile can really help to identify back or neck pain triggers.

'The perfect posture should give you a neutral side-on appearance, with your ears, shoulders, hips, knees and ankles in line.

'People who want to improve their back and neck pain symptoms through a better posture should try imagining they have a plumb line hanging straight from their ears to ankles - with everything in the middle sitting on the same line.

'One way to do this is to try standing in a relaxed way and then gently contracting the abdominal muscles.

'When sitting, the gravity line should pass thorough ear, shoulder and hip..'