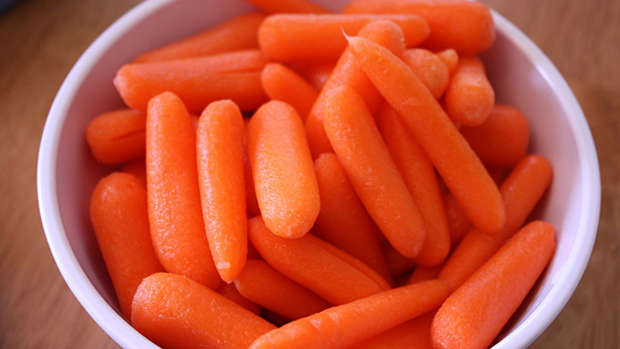 They're a big fat lie!

These cute little smooth babies are 100% made of normal carrots.

Despite their name, baby carrots are actually whole, imperfect-looking carrots that are sliced into smaller pieces and sculpted into rounded sticks.

Baby carrots were originally one farmer's ploy to sell more carrots. The late Mike Yurosek, a California carrot farmer, invented baby carrots in 1986 because most full-grown carrots were too ugly to sell.

In the 80's, supermarkets would only buy the prettiest looking carrots which meant farmers had to use the imperfect ones for juice or to feed animals. Due to the lack of demand, heaps were just thrown out.

In an attempt to find a second life for the ugly ones, Yurosek threw a few batches into an industrial green bean cutter that sliced them into uniform 2-inch pieces, then he ran them through a potato peeler to smooth them out.

He sent the polished sticks to grocery stores in California — and they were an instant hit.

These little babies are credited to saving the wasteful carrot industry. Pre-packaged baby carrots make up nearly 70 percent of all carrot sales, according to the Washington Post, while carrots in general are the seventh-most consumed fresh vegetable in the U.S.

Even though we were pretty easily fooled into thinking baby carrots grew like that, we will forgive the carrot industry...because, these little nuggets are the perfect snack.