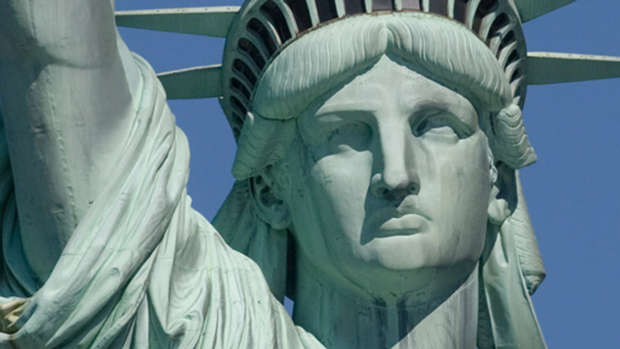 Is Lady Liberty actually a man?

A controversial new theory suggests the sculptor who created the Statue of Liberty may have used his brother as the template rather than his mother, as commonly believed.

The idea is set out in a new series of Secrets of America's Favourite Places to be broadcast on the Discovery Channel on Sunday.

It explains how the statue was an early example of a crowdfunded project - with money raised from the French public to pay for its construction costs - rather than a gift from the country's authoritarian government.

Most controversially, however, Elizabeth Mitchell, an author and journalist, questions the idea that Frédéric Auguste Bartholdi, the French creator of a statue properly known as Liberty Enlightening the World, used his mother as inspiration.

"As I was looking at it more carefully, the structure of the face isn't really the same. [His mother] has a more arched eyebrow, has a thinner nose, has thinner lips, even in her youth. And he was a bust-maker ... and was known for his accuracy," she told The New York Post.

"Going through photos he had in his files of his brother, I started to look at the face more carefully, and it really did look to be like Liberty. His brother in his adult years had actually gone mad, and it was Bartholdi's task to go once a week to visit, sometimes [spending] hours just staring at his brother, who was not speaking."

Historians have long wondered who served as a model for the 151ft statue that has stood at the entrance to New York harbour for 130 years.

Although it is commonly assumed to have been Bartholdi's mother, experts say they have no records only speculation from the time.

However, suggesting the famous visage is actually that of a man may be more of a stretch. Liberty is frequently portrayed as a woman, dating back to the Libertas, the Roman goddess.