Normally wedding announcements are things of happiness and bliss, recalling the charm of how a couple fell in love and ended up down the aisle. But for Nathaniel Peters — the great-grandson of Georg and Maria Von Trapp, made famous from The Sound of Music — and his new wife Barbara Jane Sloan, their tale of love has made them the joke of the internet.

After the couple’s love story was posted to New York Times, their wedding announcement was quick to go viral after being called ‘obnoxious’ and ‘insufferable’.

The article has been shared hundreds of times by people ripping up the bizarre quotes from Peters about his partner.

The story includes the quote: “Eventually, Ms. Sloan said, the two were spending so much time together that she asked him: ‘Is this fair? We are not too close, right?’

He said: ‘No, we are just two pilgrims along the way, traveling together for a while.”’

The two met a mutual friend’s wedding four years ago, starting off as friends he would often sing opera as he walked across an open field to her house.

She, in turn, would visit with baguettes and leftover pastries from her job at a bakery, earning the title 'friend with breadifits', Peters shared. 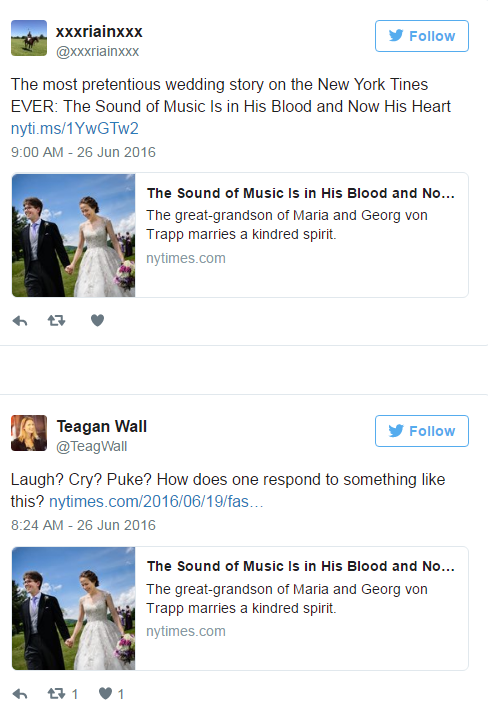 He proposed in May 2015 by decorating a small chapel his great-uncle built on the family's property with candles arranged in the shape of a heart.

She, of course, accepted, and recalled the smell of melted beeswax. He said: 'We've just had this moment of intimacy and now we're sitting here scraping wax off the floor.'

Peters described his new wife to the New York Times as having an “introverted loveliness about her.”

And when he was asked how he’d describe himself, he chose the word “heady”.

When talking about their wedding, he described the 15 different pieces of music performed as “Joyful, rich, lush. Lush like a forest, not like an alcoholic.”

We’ll leave you to decide whether the whole thing is pretentious or not, but as long as they're happy - that's all that matters!