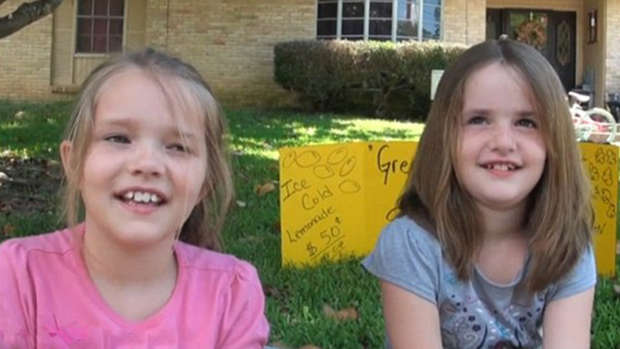 Police shut down a 50-cents-a-go lemonade stand being run by two sisters because they didn't have an official city permit.

Zoey and Andria Green, seven and eight respectively, had their fledgling business run off the streets by the chief of police in Overton, Texas, on Monday evening after he realized they were undocumented.

Despite being the model of American entrepreneurship, Zoey and Andria were told that their enterprise had to stop until country inspectors could check out their family kitchen, the Tyler Morning Telegraph reported.

The girls said: 'We didn't really know we had to get a permit... and the cops came'. They said officers talked to their mom, and made clear that 'we won't be able to sell any more lemonade'.

The pair, who were also selling popcorn at $1 a bag, were raising money to take their dad to the nearby Splash Kingdom water park as a Father's Day present for their dad, who works away at an oil field.

But Zoey and Andria had made just $27, less than a third of what they need for four tickets, when passing police busted them.

Their mother Sandi said that when they looked into getting a permit, they were told it would cost $150, and also require a trip out of town to consult the health department.

However, city authorities admitted that they wouldn't need a permit to give away their lemonade and ask for donations, which the pair are now considering.