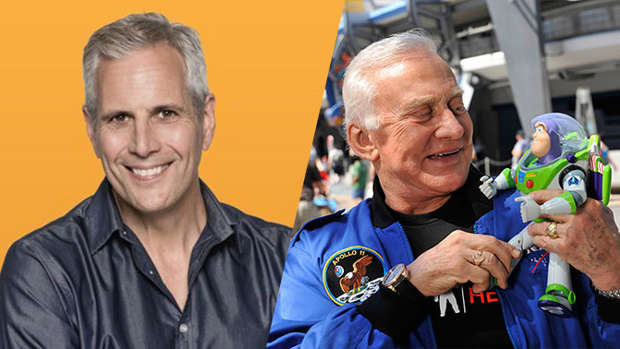 A lifelong fascination with space meant a rendezvous with the first man to walk on the moon was a total buzz.

No interviews, no autographs, no selfies.

A chance to meet the world's most famous living moon walker was not living up to any of my wildly unrealistic hopes and expectations.

Edwin Eugene "Buzz" Aldrin, the second human to walk on the moon, was in Melbourne, Australia, recently as a keynote speaker for Mars: The Live Experience; an elaborate PR event showcasing National Geographic's new mini-series MARS and also to increase awareness in our bid to colonise the red planet.

I've been a space nut for as long as I can remember, especially for the Apollo programme.

So when I was given an opportunity to see the event AND attend a special pre-show cocktail party with Buzz himself, I was over the moon! (Sorry, terrible and predictable pun intentional.)

I flew out of Auckland the day of the event and had ample time during the four hour flight to think about the evening ahead - in hindsight, perhaps too much time.

This is how I imagined things would play out: "Mr Aldrin, Rick Morin from NZME. It's a pleasure to meet you sir." The Apollo legend and Mars advocate shakes my extended hand, "Please, call me Buzz."

Twenty minutes pass and Buzz is still waxing lyrical about his personal and professional life. His assistant interrupts the interview just as Buzz is explaining how he prevented a near tragedy on the moon with nothing more than a felt tip pen, "Mr Aldrin, you're due on stage shortly. It's time to go."

The former astronaut turns to face me and shakes my hand, "Well Rick, it's been great talking with you. Say, would you like a selfie before I leave? Here's an autographed copy of my new book."

This is what actually happened: The VIP cocktail party was not something I made up. I really did attend, along with 50 or so other guests - mostly invited journalists, contest winners and local young trendies.

It was held on the second floor of the town hall on the stately Portico Balcony, a classical style open-air function room.

Before entering the room a young woman behind a desk scanned the guest list for my name, put a tick next to it, looked up and smiled, "Welcome Mr Morin, enjoy your evening."

After all I was about to meet my childhood hero ... so I thought.

An event organiser announced that Buzz Aldrin would be making an appearance soon. Finally!

Then came the bombshell, "Sorry, no interviews, no autographs, no selfies." Houston, I have a problem.

My heart sank - I had so many questions to ask him ... and besides, a selfie with Buzz would have been undeniably cool.

After about 40 minutes Buzz Aldrin emerged from a darkened room and stepped onto the white marble floor of the magnificent balcony - nothing desolate about it. His arrival was met with spontaneous applause, woo-whoos and whistles.

While much shorter than I imagined, Aldrin looked fit and sharp - few would guess he's 86 years old.

He was wearing a light coloured sports jacket, dark trousers, white shirt and his trademark Stars and Stripes tie. And in complete contrast to the smart-casual attire, both wrists were adorned with an array of beaded, gold and leather bracelets, a silicone rubber "Awareness" band ... and a large, very expensive looking watch.

I wondered if it was the watch - the same Omega Speedmaster he wore on the moon. Surely, it had to be. I convinced myself it was.

Other guest speakers were introduced; Professor Mark McMaughrean, senior science adviser at European Space Agency, NASA's Jason Crusan, director advanced exploration systems, and astrophysicist Dr Katherine Mack. An impressive group of leading authorities, to be sure, but we were all anxious to hear from you know who.

After a few brief words from each of the three guests, the microphone was handed to Aldrin. He spoke for just under 60 seconds: no mention of the moon, Mars or anything relating to space travel.

Instead he took us back to 1969 and the Australian leg of NASA's post-landing, round the world whistle-stop tour.

According to Aldrin, he and his two moon mates were quite taken by the local fashions:

"Neil Armstrong, Michael Collins and myself were in total agreement that the shortest mini skirts were in Australia."

There was a bit of laughter and a couple of wolf whistles - Aldrin cracked a cheeky grin, waved to everyone and left the room. I could only assume he was saving the "space stuff" for the actual show.

Mars: The Live Experience was staged in the main auditorium of the Melbourne Town Hall. It was part AC/DC concert, part TED Talk: Loud and Geeky. The sizeable venue was filled with a demographically varied but universally anxious audience.

The house lights dimmed as powerful stage lights flooded the auditorium in sinister shades of red, blue, purple and orange.

Smoke machines spewed make-believe rocket engine exhaust from behind a huge screen showing the mighty Saturn V rocket (the vehicle that carried the Apollo astronauts into space), lifting off from its launch pad in dramatic slow-motion; footage we've seen countless times before, but rendered bone-rattling realistic thanks to the excellent sound system.

Trust me, there are few things on this earth more impressive than the roar of a 110 metre tall rocket blasting off.

The noise was deafening yet exhilarating, frightening yet empowering. If it is possible to invoke a religious experience through sound alone, then I may well have seen the light that evening.

The lights softened, the rocket's roar subsided and the smoke cleared to reveal four "Captain's chairs" placed in a slight semi-circle at the front of the stage; Buzz would soon be sitting in one of those chairs.

Veteran Australian journalist and broadcaster, Ray Martin appeared on stage: "Ladies and gentleman ... Mr Buzz Aldrin." The Apollo legend strutted onto the stage with all the confidence of a man who ... well, of a man who had walked on the moon.

After rapturous applause, both men settled into their assigned chairs. With the help of "prompt" questions from Ray Martin, Aldrin began by sharing a couple of obligatory moon landing stories; like when he used a felt tip pen to trigger a broken circuit breaker, thus enabling the Eagle to leave the moon - MacGyver, eat your heart out!

Martin introduced another guest speaker to the stage and on cue the discussion switched orbit from the moon to Mars, which of course was the purpose of this event. I soon began to realise that listening to people talk about colonising Mars wasn't terribly exciting - not nearly as exciting as, I imagined, actually seeing it happen would be.

But according to Aldrin, that's still at least two decades away.

So while I wasn't able to score an interview, or even a selfie, I had no complaints. I did get to see in person a man I have admired since childhood - Buzz Aldrin, the second man to walk on the moon.

With any luck, and God willing, I hope to be around to see the first man or woman, walk on Mars.