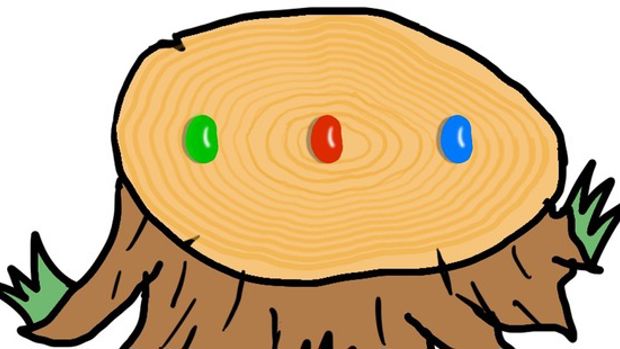 You've found the hidden panda and sussed out the image contained in a seemingly solid red dot, but now there's a new head-scratching riddle sweeping the internet.

Tim Urban and Andrew Finn of the website butwaitwhy.com have created a fiendishly difficult puzzle based around three jelly beans...

You’re wandering through a faraway land one day when you pass a plum tree. Excited, you pick a plum from the tree, but just as you’re about to take your first bite, you’re confronted by a nearby man.

“You stole one of my plums,” he says.

You try to give the plum back and explain that you didn’t mean to steal from him, you just really like plums so you picked one.

“Those aren’t mutually exclusive,” he says. “It sounds like you both really like plums and meant to steal one from me.”

“The penalty for stealing plums in our faraway land is death,” he says.

“Cool,” you say. He tells you it’s time to choose a jelly bean.

You choose the green one.

Before you put it in your mouth, the man stops you and says, “Wait a minute—there’s one other little tradition we have that we do with each prisoner. Hold on to your jelly bean. I’m going to remove one of the other two jelly beans and put it back in my pocket, and I’m going to remove a poisonous one. I know which colors are poisonous and which aren’t, and one thing I can tell you is that blue jelly beans are poisonous.”

“Okay, time to eat your jelly bean,” he says. “Oh and we also always allow prisoners to change their mind up until the last second, so if you want to switch to the red one, you can. I don’t care. But you need to eat one of them in the next 10 seconds.”

So the question is—which jelly bean do you eat? Does it even matter?

Stop and think about what you’d do in this situation before moving on...

Here’s the weird thing about that question—yes, it matters. It matters a lot. Knowing only what you know in that situation, there is one clear choice: the red jelly bean.

The green jelly bean is double as likely to kill you as the red jelly bean. Here’s why: