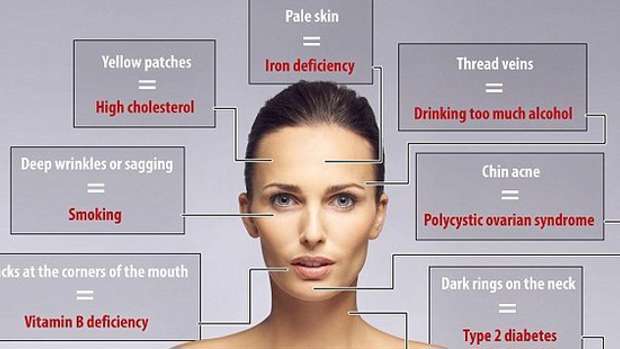 They say the face is the window to the soul.

And it can reveal a lot about a person's health, according to Healthista.

Pale skin can be due to a deficiency in iron, while sores at the side of the mouth might indicate a deficiency in B vitamins, commonly seen in vegans or people avoiding dairy.

Giving up sugar can help reduce dark rings on the neck, while ditching red wine should stop flushing and thread veins.

Here, experts reveal what the face says about health, and how to cure common ailments...

Yellow patches around the eyes, nose or mouth

Could be: High cholesterol

Here's a good reason to stay away from those bacon rolls. Two thirds of Britons over 40 have raised cholesterol (defined as exceeding 5.5mmol/L).

But those for whom the problem is particularly high may also find their clogged arteries are also reflected in the skin as fatty deposits form around the eyes, nose and mouth, a condition called xanthelasma.

"It's often associated not only with high cholesterol but also with irregularities in the way the body metabolises fats in the blood, which can run in families," says consultant dermatologist Dr Emma Starritt who is based in Sydney, Australia.

What you can do: "They can be treated with a TCA skin peel which essentially burns away layers of the skin in a controlled way and one treatment is often enough to get rid of melasma," says Dr Starrit.

"But they may come back so people might need to do a maintenance treatment every couple of years to keep them under control."

It's also important to talk to your doctor and have your cholesterol checked if you haven't already as if it is high you may need medication such as statins (cholesterol lowering drugs) and lifestyle advice.

Could be: Too little red meat

It comes with key symptoms such as pale skin and, sometimes, dark circles around the eyes.

"Other symptoms might include tiredness and lethargy because lack of iron means muscles don't get enough oxygen to them."

What you can do: The most common cause of iron deficiency anaemia is not eating enough red meat, Dr Billinski explains.

"Red meat contains haem iron which is the type found in the human body and also found in all forms of red meat, especially lean beef."

So what about vegetarians?

"Other forms of iron are lentils, beans, pulses and green leafy vegetables, however these contain non-haem iron which isn't absorbed by the body as well.

"The best way to increase absorption of iron is to consume it with a vitamin C rich food," says Dr Billinksi.

Some of these pairings might include: Vitamin C rich capsicum with iron rich spinach, vitamin C rich tomatoes with iron-rich brown lentils or having fruit such as kiwi or orange after a meal containing iron sources, she explains.

Cracks at the corners of the mouth

Could be: Avoiding dairy

Cracks at the corner of the mouth - known as angular stomatitis - can occur in people who are deficient in the B vitamins says Dr Billinski in particular vitamin B2 (also known as riboflavin) and B3.

These vitamins have anti-inflammatory properties and too little can be linked to redness in the skin and cracking at the corners of the lips. Other symptoms might also include a thickened tongue.

What you can do: Vitamin B deficiency can be common in vegans and those who avoid major food groups as B vitamins are primarily found in dairy foods, eggs, lean meat and fish.

Dark green leafy vegetables are also rich sources of B vitamins especially peas and spinach so vegans should ensure they eat enough of these and may need to take a supplement.

"The best way is to ask your doctor for a blood test to take the guess work out of whether or not you have a deficiency," says Dr Billinski.

Could be: Polycystic ovarian syndrome

Many women will break out on their chins and jaws and this area is particularly prone to fluctuations in the hormones progesterone and testosterone, especially around your period.

But if your breakouts are quite severe you might need to speak to your doctor as you might have undiagnosed polycystic ovarian syndrome (PCOS) which affects around five to 10 per cent of women of reproductive age in in the UK.

"PCOS is often underdiagnosed and one of the common symptoms is lower facial acne," says Dr Starrit.

Hormonal acne such as this is caused because women with PCOS tend to have high levels of testosterone which promotes oil production and pimple formation.

Other symptoms she explains, include having weight you can't shift.

"About 30-40 per cent of women with PCOS will be overweight and about 60 per cent of them will have facial acne," she says. Irregular periods are another warning sign.

What you can do: Talk to your doctor if you have any of the symptoms as he/she can do an ultrasound to spot ovarian abnormalities and also a blood test to check your hormone levels.

"It's an important distinction for your doctor as some Pills are 'androgenic' which means the hormones in them mimic testosterone and may make PCOS and its symptoms worse.

"The progesterone only ones shouldn't do this."

Could be: Too much red wine

"But if someone with a tendency towards flushing drinks to excess night after night, in as little as two years the blood vessels lose tone and they can end up with permanent redness and thread veins'.

This flushing into the blood vessels can also be triggered in those with a tendency by caffeine and spicy foods.

What you can do: Red wine contains tannins that can promote flushing so switching to white might help, but the best thing you can do to stop it from getting worse is avoid any foods and drinks that trigger flushing in you and also, to be meticulous about sun care, he explains.

"That will mean wearing a sunscreen with SPF 30 everyday, all year around as sunlight makes flushing worse and can lead to long term damage in the form of broken blood vessels."

A course of five sessions of Intense Pulsed Light (IPL) with a dermatologist will help the redness.

"But be ready for two days of increased reddening."

"Smoking makes all lines worse by damaging the collagen and elastin in the skin that give it its plumpness," says London anti-ageing physician Dr Lynette Yong.

"With age the muscles, fat and bones under the skin shrink and this can lead to sagging," says Dr Yong.

"Smoking deoxygenates the blood so you get less nutrients going to the skin, dramatically accelerating this sagging and wrinkling effect".

Although the more you smoke, the worse the effects, only one cigarette a day can damage the skin by starving it of nutrients in this way, she asserts.

What you can do: Give it up. How about some damage control?

Dark rings on the neck

Could be: Sugary diet

Brown rings or patches on the neck can be a surprising sign that you're at increased risk of developing type-2 diabetes.

Some 3.2 million Britons have diabetes but staggeringly up to 850,000 of them are living with the conditions still undiagnosed.

Known as acanthosis nigricans, the patches indicate that the body is becoming resistant to insulin which we use to process sugar and this condition is a common precursor to diabetes, often brought on by obesity or a diet high in sugar and refined carbohydrates.

"It can also appear in the armpits as well as the neck," says Dr Starrit.

What you can do: Brown rings or patches on the neck or armpits need to be investigated and the first thing this will involve is having your sugar levels checked by your doctor, says Dr Starrit.

The good news is that having insulin resistance doesn't mean you're guaranteed to develop type 2 diabetes and switching to a balanced, low-sugar, low refined carbohydrate diet and losing weight if you need to can reverse it or halt its progression.

There's no specific treatment for acanthosis nigricans but as the underlying condition is treated - for example obesity or insulin resistance - they often fade, says Dr Lowe.