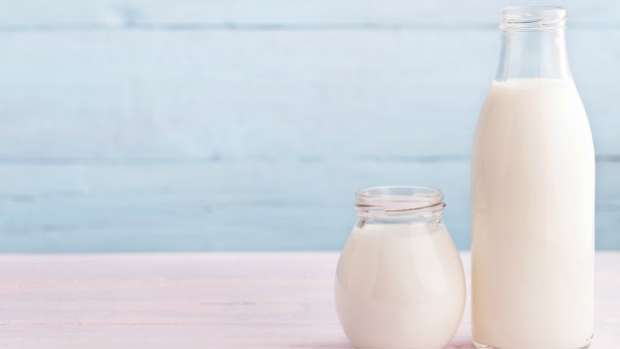 If you're still drinking skim, then read this...

For years you’ve been told to go for skim over full-fat dairy. But large population studies that look at possible links between full-fat dairy consumption, weight and disease risk are starting to call that advice into question. And some research suggests people who consume full-fat dairy weigh less and are less likely to develop diabetes, too.

In a new study published in the journal Circulation, Dr. Dariush Mozaffarian and his colleagues analyzed the blood of 3,333 adults enrolled in the Nurses’ Health Study of Health Professionals Follow-up Study taken over 15 years. They found that people who had higher levels of three different byproducts of full-fat dairy had, on average, a 46% lower risk of getting diabetes during the study period than those with lower levels. “I think these findings together with those from other studies do call for a change in the policy of recommending only low-fat dairy products,” says Mozaffarian. “There is no prospective human evidence that people who eat low-fat dairy do better than people who eat whole-fat dairy.”

Since full-fat dairy products contain more calories, many experts assumed avoiding it would lower diabetes risk. But studies have found that when people reduce how much fat they eat, they tend to replace it with sugar or carbohydrates, both of which can have worse effects on insulin and diabetes risk. In the current study, Mozaffarian adjusted for the role that weight plays, and found the connection between full-fat dairy intake and lower diabetes risk remained strong independent of weight gain.

In fact, in a separate study published in the American Journal of Nutrition, another group analysed the effects of full fat and low fat dairy on obesity and found that among 18,438 women in the Women’s Health Study, those who consumed the most high-fat dairy products lowered their risk of being overweight of obese by 8%.

Together, the body of data is beginning to reveal both that full-fat dairy has a place in a healthy diet, and also how focusing on one nutrient in the diet may backfire. When dietary guidelines began urging people to lower the amount of fat they ate, the idea was to reduce the amount of cholesterol and unhealthy fats in the body. But by focusing just on cutting out fat, experts didn’t count on the fact that people would compensate for the missing fat and start loading up on carbohydrates, which the body converts into sugar—and then body fat.

“This is just one more piece of evidence showing that we really need to stop making recommendations about food based on theories about one nutrient in food,” says Mozaffarian. “It’s crucial at this time to understand that it’s about food as a whole, and not about single nutrients.”

While it’s not entirely clear how whole fat is helping to lower risk of diabetes, it’s possible that it’s working on several different levels to regulate insulin and glucose. At the simplest level, people eating more high fat dairy products will have enough calories so they won’t feel hungry enough to need additional calories from sugary foods. It’s also possible that the fats in dairy may be acting directly on cells, working on the liver and muscle to improve their ability to break down sugar from food. And then there’s the possibility that for certain high fat dairy foods, like cheese, which is fermented, microbes may be working to improve insulin response and lower diabetes risk too.

Mozaffarian isn’t advocating that people start consuming vast amounts of high fat dairy products if they’re worried about their diabetes risk. More studies need to be done in order for dietary guidelines to start recommending full fat dairy in order to improve health. But the results so far do support backing away from recommending just low fat options, he says. “In the absence of any evidence for the superior effects of low fat dairy, and some evidence that there may be better benefits of whole fat dairy products for diabetes, why are we recommending only low fat diary? We should be telling people to eat a variety of dairy and remove the recommendation about fat content.”