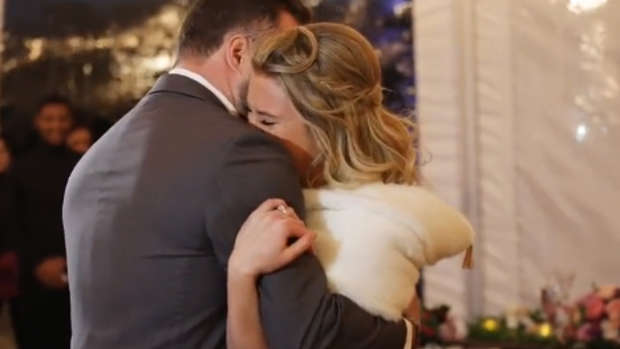 As newlyweds Chelsey Mahlke and Darin Mahlke began their first dance, the bride was expecting to hear the floating bass line from Elvis Presley's 'Can't Help Falling in Love' ... but instead, the couple's first dance took an unexpected turn.

For the special moment, Chelsey was surprised by her groom with a 1947 recording of her late grandmother Janience Bellanger singing a beautiful rendition of 'Somewhere Over the Rainbow' as a teenager.

"Honey, I'm sorry, there's a better song," Darin Mahlke, 43, can be heard saying in the video.

"And it's sung by someone who would have loved to be here today. And in this way, she can."

Chelsey, a cattle rancher from Las Vegas, had an inseparable attachment with her grandmother who died in 2005 from ALS.

So when the song played, she was overcome with emotion as her grandmother’s voice filled the wedding tent.

Posting the heartwarming moment to TikTok, it no surprise the video has garnered more than 2.7 million views already.