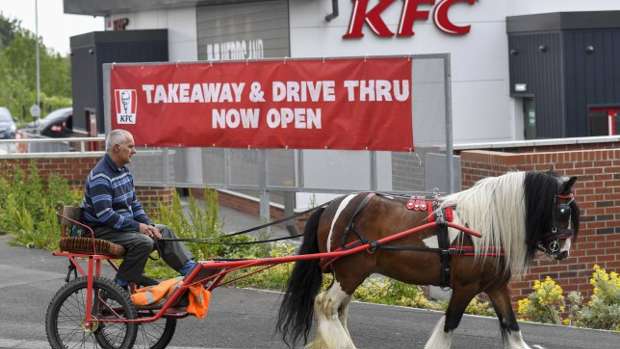 A traveller says he was left ‘humiliated’ after KFC refused to serve him at a drive-through while he was riding a horse and cart.

Ian Bell, 55, made it as far as the kiosk window last week only for a manager to come out and say he would have to leave for the health and safety of other customers.

He says he doesn’t understand, as his horse Jon Jon is as ‘good as gold’, adding: ‘Horse and carts were around long before motor cars.’

‘In the end, I had to go to McDonald’s for a Big Mac. No one there batted an eyelid, they didn’t say anything to me at all, they just served me my food.’

Dad-of-one Ian added: ‘I think my treatment from KFC has been downright disgusting and discriminatory against people who use horse and carts. ‘The horse and cart is a common way to get around where I’m from.’

The fast-food franchise has spoken out in defence of the manager’s decision to deny Ian and Jon Jon service, insisting the safety of guests is ‘really important’. A KFC spokesman said: ‘Hold your horses, Carlisle. ‘We’re not looking to stirrup trouble and we’re sorry for Ian and Jon Jon’s experience – but the safety of our guests is really important, so we can’t allow horse-drawn vehicles in our drive-thrus.’