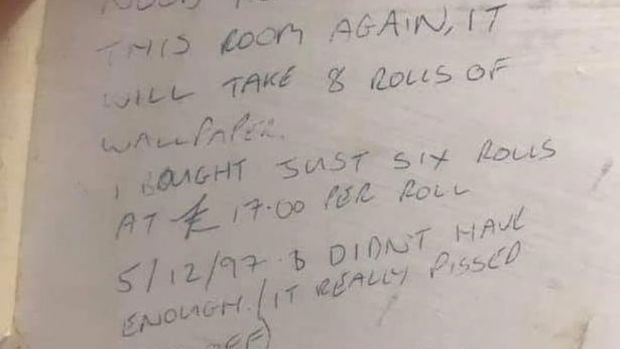 A woman renovating her home was caught by surprise after finding a hidden note.

The Australian mum was in the midst of peeling off the old wallpaper in her house when she uncovered a handy message from the previous owner.

Written in pen, was a DIY hack which was signed off by someone called "Jon" on December 21 1997 - and had only been uncovered 22 years later.

It read: "If you ever need to wallpaper this room again, it will take 8 rolls of wallpaper."I bought just six rolls at $17 per roll on [December 5 1997] and didn’t have enough. It really pissed me off."

The eager DIY fan shared the snap to a mum's group on Facebook - and since then has been inundated with comments from people praising the idea, with some calling it "clever" and "thoughtful."