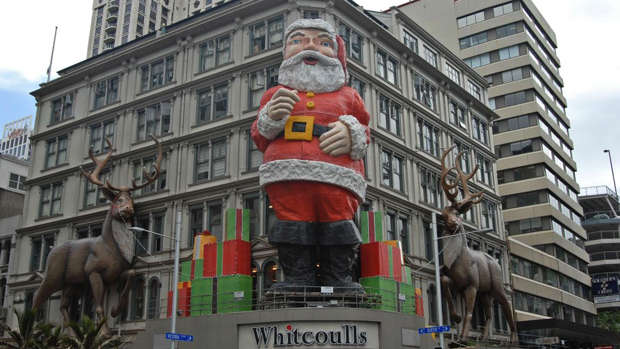 He was the world's largest fibreglass Santa when he was built in 1960, but Auckland's giant Santa will retire after this Christmas.

For the best part of 60 years, the big man has towered over Aucklanders each festive season, changed hands for $1, lost his wink and moving finger, and crowned the world's creepiest Christmas ornament.

But after being saved from retirement in 2014, the central city's business association Heart of the City says this time it's for real. Santa will appear one last time atop the Farmers building in Queen St before hanging up his red coat for good on January 10.

"We know Santa is well-loved by many Aucklanders," Heart of the City chief executive Viv Beck said, "but sadly, for a combination of reasons, it feels the time is right to retire this model." The reasons include the need for a fresh paint of the weary Father Christmas, his 18-metre, five-tonne frame costs $200,000 to store, maintain and assemble, and he needs a new home to rest up.

From 1960, when Santa was installed on the Farmers flagship store on Hobson St, to the current day, where he sits above the Farmers store on Queen St, Beck said Santa was a joyous part of Auckland's Christmas tradition so it was important to give the cheery figure a fitting send-off.

"We want to provide Aucklanders with the opportunity to say goodbye to Santa. Many of us have fond memories of him," Beck said.

Heart of the City is inviting people to share their memories and photos of Santa which can be uploaded to heartofthecity.co.nz, emailed to [email protected] or shared on Instagram and Facebook using #FarewellSanta. They will be published on a dedicated page on heartofthecity.co.nz/farewellsanta.

Beck said Santa's retirement had prompted a rethink of how to celebrate Christmas in a changing city like Auckland, but it may take a few years.

Will there be another Santa?

"I can't answer that now because we need to think about how we do celebrate Christmas. It's important we don't lose all the traditions of Santa but how we represent that from next year onwards we haven't confirmed yet. It may or may not have another Santa," Beck said.

Mayor Phil Goff said Santa had been an iconic figure and there would be a degree of sadness about his retirement, but accepted the decision by Heart of the City.

1998: Santa sold for $1 to special events executive Stephen Hanford and returned to the Whitcoulls building in Queen St after a $40,000 make-over.

2008: Whitcoulls gift Santa to the city.

He will be missed!