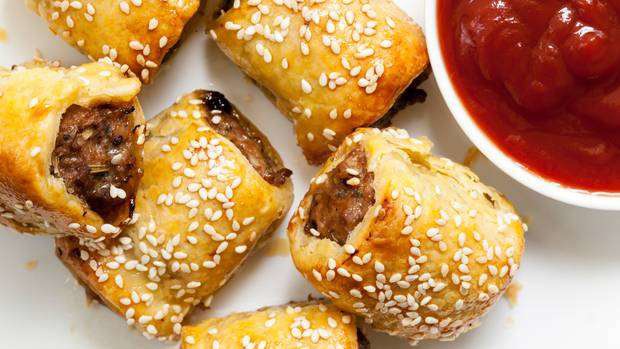 The next time you tuck into the flaky pastry and greasy meat mash of a sausage roll, standard at most Kiwi office morning teas, you might want to ponder this question currently causing outrage on Twitter:

Such is the conundrum that's been sparked by a New York Magazine article calling a sausage, still piped in its synthetic casing and rolled in pastry, a pig in a blanket.

Pigs in a blanket are the Tom Hanks of party snacks: universally beloved. They're unassuming, inoffensive, yet somehow still a joy to behold, writes @nikitarbk https://t.co/eoBRPh7GMW

Brits on Twitter have piled on the post, furious that Americans would call what they firmly believe is a sausage roll anything else.

UK food critic Jay Rayner took exception, tweeting: "And as one the messy divided so-called country that is the UK finally unites to shout: THOSE ARE NOT PIGS IN BLANKETS. THEY'RE BLOODY SAUSAGE ROLLS."

While another commenter wrote: "Alright America. You can have your weird spellings of 'honor' and 'color' etc, your weird aluminum, and even your frankly nonsense ideas of what chips, biscuits and scones are. But these, these are not pigs in blankets. These are sausage rolls. This is a hill I will die on."

If you like pigs in blankets you should try cheese on toast pic.twitter.com/kH5CoADKPV

As far as the British are concerned, a pig in a blanket refers to a sausage wrapped in more pork: bacon to be precise. As soon as it's rolled in pastry, however, it must be referred to as a sausage roll.

A quick search of New Zealand and Australian recipe sites reveals that by and large, chefs and recipe creators down under tend to agree with the Americans: plenty of recipes for pigs in blankets show sausages wrapped in pastry, while sausage roll recipes call for minced pork - sometimes with the arguably unfortunate addition of peas and carrots.

But Lucy Corry, recipe columnist for the Herald's food magazine, Be Well, explained that while there's a clear difference between a sausage roll and a pig in a blanket, what New York Magazine presented shouldn't be considered either.

"A sausage, still in its casing, in pastry, is neither fish nor fowl (to mix food metaphors). It's a weird hybrid of both sausage roll and pig in a blanket. I don't approve!"

What is a sausage roll?

"A sausage roll is sausage meat (actual minced meat, preferably pork, with a good amount of onion, herbs and seasoning but definitely NO peas or carrots) encased in golden, buttery, pastry that flakes all down your front as you eat it," says Corry.

"I have eaten very good lentil-based 'un-sausage' rolls before too, but let's not complicate matters."

What is a pig in a blanket?

"By contrast, a pig in a blanket is a little sausage (again, ideally one that is made from real meat, ethically grown and produced, with no dodgy filler) lovingly wrapped in bacon. It's the original double-down, you might say."

Corry also explains a sausage roll has an entirely different function to a pig in a blanket:

"Whereas a sausage roll is a meal in itself, a pig in a blanket is a canape, or something to have alongside a proper, traditional Christmas turkey-feast, with bread sauce and cranberry jelly. Good sausages and good bacon are hard to find, so it's fitting that pigs in blankets are not something for every day."

Kathy Paterson, cookbook author and fellow Be Well recipe writer says, "New Zealanders have a cult following for the sausage roll," which Paterson describes as "a seasoned mince or sausage meat mixture wrapped in puff or flaky pastry to form a roll and ideally baked until the pastry is well browned and crisp."